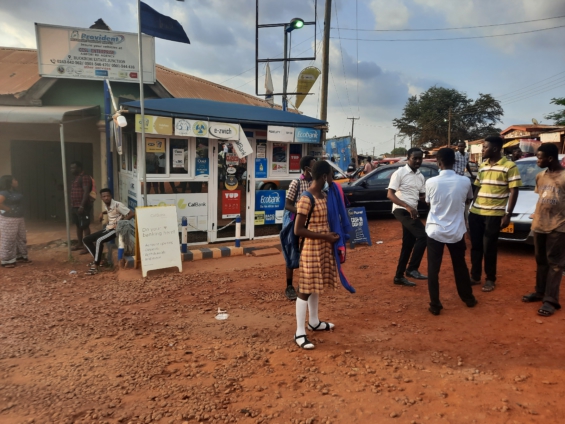 Scene of the robbery

A financial services firm, CSSL Enterprise, has been robbed of over ¢140,000 at Buokrom Estate Junction in Kumasi.

A staff of the company, Collins Dapaah, who sustained severe injuries from gunshots during the incident, has died.

The armed robbers held staff and clients of the non-bank financial institution hostage, as they ransacked their treasury. They bolted with proceeds from the day’s financial transactions.

One of the robbers manned the entrance, as the other demanded money after shooting thrice into the roof of the building, said one of the workers.

“We were attending to a customer when a fair tall man entered and held the customer. We thought they were about to fight.

“But it turned out to be a robbery. He then commanded everyone to lie down, and he took all the money,” Charity narrated the incident amidst tears.

One other staff who sensed danger when the two men stepped into the premises, dashed to the washroom to place a phone call to a neighbour, Collins Dapaah, for help.

In his attempt to move in to the premises, Collins was shot at the entrance.

The broad day light armed robbery attack has come as a shock to residents.The police are on a hunt for the robbers.