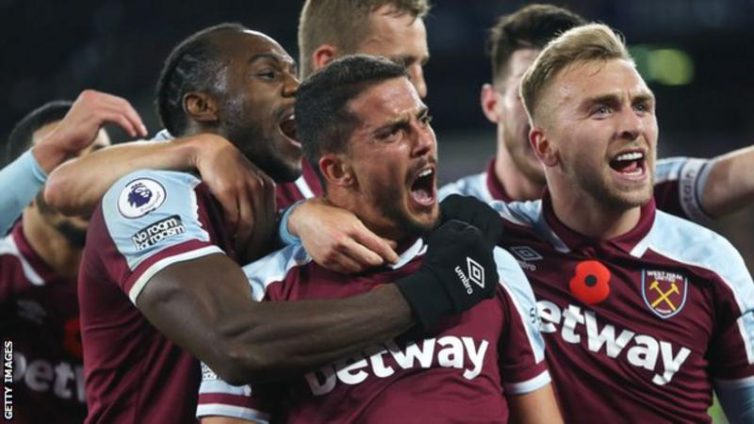 Four Premier League wins in a row, third in the table and three points behind leaders Chelsea – is it time to consider West Ham genuine title challengers?

The Hammers stunned Liverpool on Sunday to leapfrog Jurgen Klopp’s side in the table heading into the international break.

There is, of course, still a long way to go but after 11 games, David Moyes’ side are looking the real deal and fully deserving of their place among the usual suspects.

West Ham forward Pablo Fornals, who scored in the 3-2 win against the Reds, sees no reason to put any limits on their aspirations this season.

Asked if they can win the title, he told BBC Sport: “I don’t know. It is too early to say. But fighting for each game as we did today, why not dream?”

So, just how far can they go this season?

West Ham missed out on a top-four finish by just two points last season but rather than that campaign being a blip, they have instead built on it.

Since taking charge two years ago, Moyes has turned the Hammers from a side languishing in the bottom half of the table to one that deserves its current place in the top three.

Their progress has been particularly impressive in 2021. They have amassed 65 points in the Premier League so far this year – only reigning Premier League champions Manchester City (80) and reigning European champions Chelsea (66) have earned more.

Key to that impressive form has been the combination of having a disciplined defence as well as pace and skill on the counter to pick teams off.

They are also the Premier League’s set-piece specialists. Two of their three goals against Liverpool came from such situations. Under Moyes, West Ham have scored 32 Premier League goals from set-pieces, five more than any other side.

But despite their eye-catching results, Moyes is not getting too carried away just yet.

“I want to be really positive all the time, I would like to say that is what we can do but I don’t see that at the moment,” he said when asked if his side are title contenders.

“We missed out on Champions League football by two points – so why can we not be there?

“We are not getting carried away but it is feeling good at the moment.”

‘Enjoy the ride’ – but can they do a Leicester?

Leicester’s Premier League title win in 2015-16 shows that when everything comes together – the manager, players and the team spirit – then the unexpected can happen.

West Ham certainly have much in common with that Leicester team. They have an astute manager in Moyes who, like in his Everton days, is showing his ability to be able to get the best out of the squad he has.

They also have a group of players with a strong team spirit, clearly fighting for each other in every game.

“It will be difficult because they need to add to their squad. At the moment, let these fans, and the manager and the players, enjoy the ride. It’s good times at West Ham at the moment.”

For Liverpool, the defeat ended their hopes of setting a new club record of 26 games unbeaten.

They did come close as a Sadio Mane header late on bounced just wide, but boss Jurgen Klopp ultimately felt two key decisions went against his side.

The first was the decision not to rule out West Ham’s opening goal for a foul on goalkeeper Alisson by Angelo Ogbonna and the second was not to send off Aaron Cresswell in the first half for his challenge on Jordan Henderson.

Klopp said: “So we lost that game. But I think it’s a clear foul on Alisson, how can it not be? When you see the dynamic of the situation how can that not be a foul?

“Then I saw only the situation with Aaron and Hendo now, and the way I see it is it’s a clear red card. There is no discussion. You cannot go like this into a challenge.”

With big teams dropping points and the likes of West Ham challenging the traditional order, the signs are good for a closely fought and unpredictable title battle.