'Show us one thing you did to end dumsor' – Mahama challenges Akufo-Addo - MyJoyOnline.com 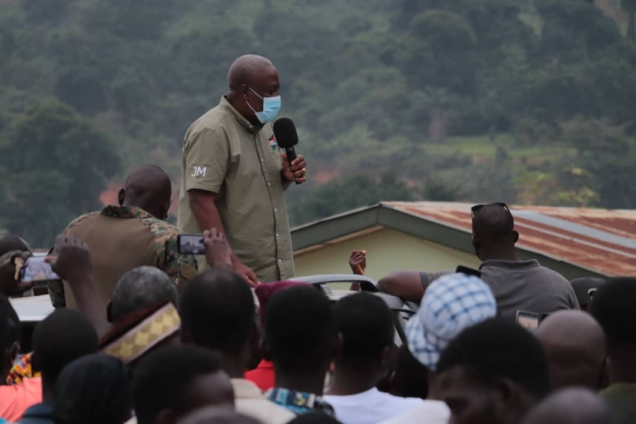 Presidential Candidate of the opposition National Democratic Congress (NDC), John Mahama has challenged his successor, President Akufo-Addo to show proof that the governing New Patriotic Party ended the power crisis in the country.

Addressing the people of the Adentan constituency as part of his tour in the Greater Accra Region, Mr Mahama said that his government made certain that power cuts popularly known as ‘dumsor’ was addressed before the Akufo-Addo government assumed office.

“I tell you that, I solved dumsor before leaving power. But if the NPP says they did it, then they should show us just one power plant that they procured in addition to what we [NDC] did,” he emphasized.

Since 2018, the incumbent government has been praising itself for ‘finally’ ending the power crisis.

Presenting the Mid-year Budget Review to Parliament on Thursday, July 23, 2020, the Finance Minister, Ken Ofori-Atta said load shedding in the country has been stabilised.

“It is clear to our fellow Ghanaians by now that we have enjoyed three and half years of reliable and cheaper power,” he stated.

However, former President Mahama is of the view that the incumbent government wants to keep the glory for political points and to deceive Ghanaians ahead of the upcoming election.

He urged the Adentan constituents to kick out the Akufo-Addo government in the December 7 polls.