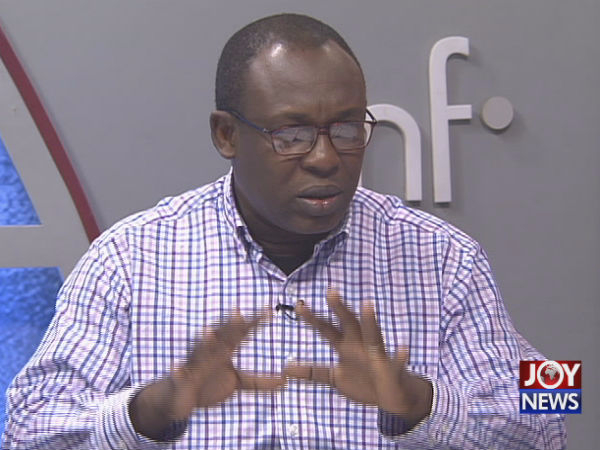 The vice-president of policy think tank IMANI Ghana, Kofi Bentil says he is happy with the silence and lack of information from state agencies involved in the frozen bank account and assets of the former COCOBOD boss.

He believes due process is being done and he is happy that the Economic and Organised Crime Office (EOCO) has taken charge of the matter to ensure that the right thing is done.

Speaking on Joy FM/MultiTV's news analysis program Newsfile, Saturday, he said although there are speculations about what Dr Stephen Opuni might have done to have his bank account and assets frozen, it is good the security agencies are not part of the media banter of speculations.

Mr Bentil urged them to put their noses down and ensure that the right things are done as the laws of the land dictates.

“I like this process and the way things are going…when it [investigations] are completed and they [security agencies, EOCO] are sure of their findings they can come out and talk and let Opuni have his time to defend himself," he said.

Information gathered by Joy News indicates that the COCOBOD CEO is being investigated for some fraudulent transactions during his leadership of the institution.

Mr Opuni's assets have been frozen by the Economic and Organised Crime Office (EOCO) pending conclusion on the investigation.

Sources close to Joy News say Dr Opuni is being investigated for some multi-million dollar contracts he is purported to have signed before leaving office.

Days to the January 7 swearing-in ceremony, the governing New Patriotic Party (NPP) had implored officials of the erstwhile government to desist from signing contracts with policy implications.

However, sources say Dr Opuni flouted that regulation to sign some contracts with some private companies. The detail of the said contracts has not been made known.

The three-year tenure of the former COCOBOD CEO had been fraught with corruption allegations resulting in the agitation of the workers union.

But the claim was rebutted by some of the staff who accused their colleagues of doing the bidding of their paymasters. The former CEO who was appointed by the former President John Mahama on November 30, 2013 when he was heading the Food and Drugs Authority (FDA)

However, Mr Bentil believes the silence from the NDC members "is because the powers that be are organising themselves well according to law. And I hope everything would be done like this."

He said considering the organisations that fall under EOCO it can be transformed into the Special Prosecutors office.

Commenting on the issue, Kweku Kwarteng who is a member of the New Patriotic Party (NPP), said nobody knows for sure if Dr Opuni has done anything wrong but if the state agencies believe that something has to be done contrary to law, they would do the right thing.

He said it is a warning for those in power to note that if the wrong thing is done, they would be investigated even if that would be done by another government.

For his part, the former Central regional Minister in the Mahama administration, Ricketts Hagan criticised EOCO's actions adding "due process does not mean that when you are investigating someone you freeze their assets."