Silent killler on the prowl: 35% of Ghanaian adults are hypertensive 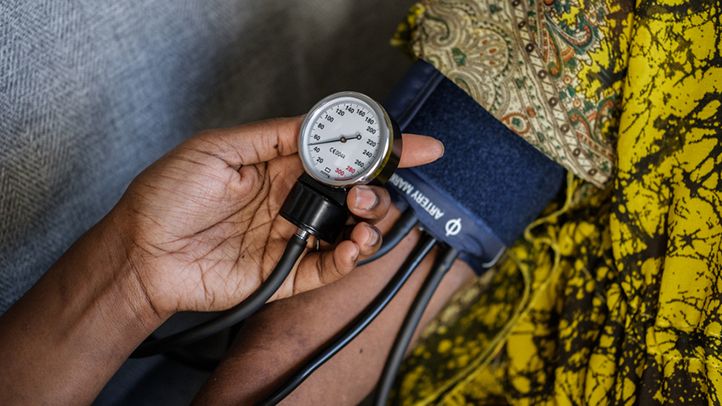 Data available to the Ministry of Health indicates that approximately 35 per cent of the adult population of the country are hypertensive.

The disease has been described as a silent killer with many more affected people unaware of their condition or are undiagnosed.

Consequently, the Ghanaian Society of Cardiology (GSC) has called for an urgent need to re-strategise to diagnose all hypertensive cases for effective management to avert more preventable deaths and disabilities while efforts on prevalence control continue.

It said key among the NCDs and CVDs were stroke, heart and kidney diseases and attributed the high national burden to gaps in treatment and diagnosis, among other reasons.

To discuss how to deal with the high prevalence of hypertension in the country, the GSC has, in partnership with the World Health Federation, brought together key stakeholders to discuss the roadblocks to reducing the high burden of hypertension and suggest pragmatic solutions to address them quickly.

The two-day roundtable discussion, which started in Accra Wednesday, seeks to map the national burden and the gaps in care, identify the opportunities and lead a national strategic framework to help address the gaps.

It has brought together renowned consultant cardiologists, other practitioners in the field and stakeholders from among policymakers, academia, practitioners, development partners, and non-governmental organisations, among others.

The findings of a country mapping indicated that 34 per cent of the population between 30 and 70 years had blood pressure, with less than half being aware and an indication of gaps in screening and detection.

The report said although hypertension control was achieved through effective and continuous treatment, only 36 out of every 100 diagnosed persons were currently taking their medications, which also indicated a possible significant roadblock in access to and availability of treatment in the country.

“Successfully controlling blood pressure through medication and healthy lifestyles is key to avoiding the negative consequences, such as stroke, heart and kidney diseases,” the mapping report said.

It mentioned the risk factors including tobacco use, use of dietary salt above the WHO recommendation of at most five grammes a day and obesity.

The WHO said modifiable risk factors included unhealthy diets (excessive salt consumption, a diet high in saturated fat and trans fats, low intake of fruits and vegetables), physical inactivity, consumption of tobacco and alcohol and being overweight or obese.

It said nonmodifiable risk factors included a family history of hypertension, age over 65 years and co-existing diseases such as diabetes or kidney disease.

The Director-General of the Ghana Health Service (GHS), Dr Patrick Kuma-Aboagye, said data indicated that more than 600,000 people, comprising 400,000 females and 200,000 men, were diagnosed with high blood pressure every year, with many more affected people undiagnosed.

He said the outcome of the discussions would enhance ongoing efforts by the Ministry of Health and the GHS to aggressively reduce the NCD and hypertension burden through effective control and management at all levels within and outside the health sector.

The situation, he said, was said to be increasing the already huge national burden, while claiming high numbers of productive human resources annually.

In his welcome address, the President of the GSC and consultant physician and cardiologist at the Korle Bu Teaching Hospital, Dr Alfred Doku, said despite the urgent need, the health system in the country and sub-Saharan Africa was not well positioned to tackle NCDs and CVDs.

In a speech read on his behalf, the Minister of Health, Kwaku Agyeman-Manu, said the introduction of national policy guidelines for the control and management of NCDs and CVD was a demonstration of the government’s resolve to see a win in the fight against NCDs.

He said the discussions should contribute workable solutions that would fill in the gaps in ongoing interventions.

DISCLAIMER: The Views, Comments, Opinions, Contributions and Statements made by Readers and Contributors on this platform do not necessarily represent the views or policy of Multimedia Group Limited.
Tags:
Cardiovascular diseases
Hypertension
Ministry of Health
Non-Communicable diseases