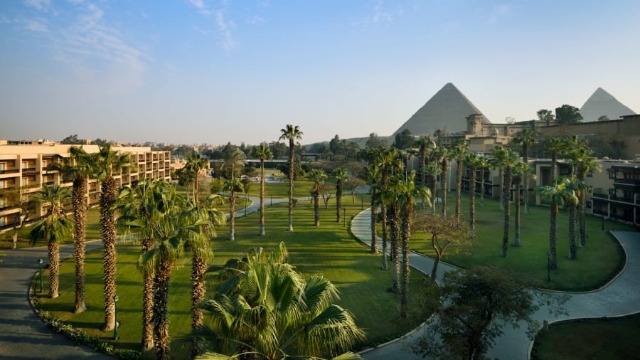 Egypt has been attracting tourists for nearly as long as the pyramids have been around.

The ancient Greek author Herodotus, the spiritual father of travel writing, called it “the gift of the river” Nile.

Roman travellers carved graffiti into paranoiac tombs in the Valley of the Kings, leaving comments similar to what you might find on Yelp or TripAdvisor today.

“But that became a steady flow in the wake of the publication of a profusely illustrated work on the country prepared by scientists and artists who accompanied Napoleon’s invasion of Egypt in 1798.”

“Particularly from the 1880s onwards, the number of visitors to Egypt boomed, when it became the fashionable destination for tourists who had done Europe and were looking for the next chic thing.”

One of the spin-offs of Egypt becoming the next big thing in tourism was the emergence of elegant hotels up and down the Nile, virtual palaces that catered to the whims and fancies of Victorian-era travellers.

“Given that it was really only the wealthy that could afford to travel, the hotels were almost like private clubs in which people of similar class and breeding met and socialized, with the local setting adding colour and spice,” Humphreys explains.

The hotels were typically run by fellow Europeans, maybe even a fellow national.

The French would stay at French-run hotels, the English at English-run, and so on — offering a degree of familiarity and security in a country that was very strange and foreign.

“From the safety of their balconies and terraces, guests could observe the native life with a brandy in hand while being serenaded by a string quartet in the corner,” says Humphreys.

They were also strategically located — beside the River Nile, on the Mediterranean seafront, near the pyramids or ancient temples — to take full advantage of the historical location of Egypt’s dreamy views.

Many of Egypt’s grand hotels fell on hard times after World War II when the Suez Crisis and the Arab-Israeli wars caused a downturn in Middle East tourism.

But this slump probably spared many of them the wrecking ball.

Rather than being knocked down and replaced by something more modern, a good number of the Victorian and Edwardian abodes survived into the 21st century and eventual resurrection into modern hotels that are now some of the most romantic, intriguing places to stay in all of Egypt.

Here are nine historic hotels that made the leap into modern times:

No hotel on the entire planet boasts a more extraordinary location, right beside the Pyramids of Giza with many of the guest rooms offering views of the timeless stone landmarks.

Originally built as a royal hunting lodge for Khedive Ismail of Egypt, it was transformed into a hotel by an English couple and named after the founding pharaoh of the First Dynasty (Menes).

In addition to numerous British royals, many celebrities have bunked there over the years, from Sherlock Holmes scribe Arthur Conan Doyle to Charlie Chaplin and Frank Sinatra.

Located along the breezy Corniche avenue on the east bank of the River Nile, the Winter Palace is renowned as the spot where Agatha Christie wrote “Death on the Nile” in the late 1930s and the place where the discovery of King Tut’s Tomb was revealed to the world in 1922.

Now managed by the French Sofitel group, the Winter Palace lies within easy walking distance of the Temple of Luxor and the Luxor Museum and offers a great base for visiting the Temple of Karnak and Valley of the Kings.

By the time author Lawrence Durrell published “The Alexandria Quartet” in the 1950s, the Cecil was already a grand dame of the city’s waterfront.

But the classic tales of romance and soul searching on a wistful Mediterranean shore shot the hotel to even greater fame.

Opened in 1929 by a French-Egyptian Jewish family, the Cecil is where the likes of singer Josephine Baker, sculptor Henry Moore and author W. Somerset Maugham slept during visits to Alexandria.

During World War II, the British Secret Service coordinated anti-Nazi spycraft from a suite at the Cecil.

The hotel’s plush Monty Bar is named for British field marshal Bernard “Monty” Montgomery, who was also a habitué during the war.

Since 2014, the Cecil Hotel has been managed, and refurbished, by luxury Steigenberger Hotels & Resorts of Germany.

Rather than starting life as a place where people could eat and sleep, the Windsor was originally built in 1893 as Turkish baths for Egypt’s royal family.

The six-storey structure in the heart of old Cairo later served as British Army officers’ club before being converted into a hotel.

“It’s a time capsule,” writes Andrew Humphreys. “Not just of Cairo, but of a very particular vanished world of steamer trunks, Baedekers and gin and tonic sundowners.”

Especially the Windsor’s celebrated Barrel Bar. The front desk looks like something from a 1930’s movie, while the roof terrace provides a sunny escape from the hustle and bustle of downtown Cairo.

The hotel is still owned and operated by the William Doss family, which purchased the property in 1962.

Over the years, the Windsor has provided an atmospheric backdrop for a number of movies and television shows including “Legend of the Lost Tomb”(1997) and “Around the World in 80 Days with Michael Palin” (1989).

– This luxurious hotel was founded back in 1937. Courtesy Helnan International Hotels

Faiyum Oasis provides a verdant setting for this vintage resort hotel about 100 kilometres south of Cairo on the western edge of the Nile Valley.

Unveiled in 1937 as a hunting lodge and lakefront retreat for Egypt’s King Farouk, the sprawling waterfront compound was also the setting for many of the country’s early black and white movies as well as global detente.

This includes the 1945 confab between then British Prime Minister Winston Churchill and Saudi Arabian monarch Abdulaziz Ibn Saud that helped lay the groundwork for the post-war Middle East.

If there’s any establishment that can give Mena House and the Winter Palace a run as Egypt’s most romantic hotel, it’s the Old Cataract in Aswan.

Perched on rocky bluffs above the Nile, the rust-coloured building overlooks Elephantine Island and a constant stream of felucca sailing boats flitting up and down the river — best viewed while sipping cocktails or afternoon tea on the riverside terrace.

A pastiche of Middle Eastern and North African styles, the Old Cataract flaunts Moorish arches, Persian carpets, mashrabiya windows, Nubian massage in the plush spa, and an indoor pool that would have delighted an ancient Egyptian queen.

From Princess Diana to Queen Noor of Jordan, plenty of modern royalty has stayed at the Old Cataract.

Topping off the hotel’s myriad services and amenities are limousine excursions to Abu Simbel, Philae Temple or even down the Nile to Luxor.

Although it calls itself Egypt’s first boutique hotel, the Villa Belle Epoque traces its architectural roots to 1920s when it was built as a private residence in a posh new suburb called Maadi.

Located about half an hour from Tahrir Square by car or 40 minutes by metro, the villa sports an outdoor swimming pool and sundecks in a fruit-tree-filled garden. The coffee houses, cafes and boutiques of Maadi’s chic Road 9 are only a short walk away.

You can also dine in at the villa’s Acacia Restaurant with its fusion foods and modern takes on Middle Eastern classics.

Located just down the waterfront from the Cecil, the Windsor Palace is another one of those early 20th century odes to the British colonial influence in Egypt on either side of World War I.

Many of the grandiose public rooms, decorated with flamboyant chandeliers and hand-painted ceilings, are still named for British monarchs.

While furnishings in the high-ceilinged guest rooms definitely takes you back to Edwardian times.

The Windsor’s apogee is the open-air Blue Harbor Roof Cafe, with its panoramic views of the bay, Qaitbay Citadel and Mediterranean Sea.

– This former royal palace was built by Khedive Ismail in 1869. Courtesy Marriott Hotels

Once upon a time it really was a royal palace, opened in 1869 on Zamalek Island at the behest of Khedive Ismail as a guest house for dignitaries attending the opening of the Suez Canal that year.

Designed by German and Austrian architects, the hotel offers an eclectic blend of Moorish arches and French Empire-style furnishings.

From birthday parties to wedding banquets many royal events took place there over the years.

Until the early 1960s, when the property was seized by the government of President Nasser and converted into a hotel.

Marriott Corp has managed the palace with panache since the 1970s, many of the rooms restored to their original splendor.