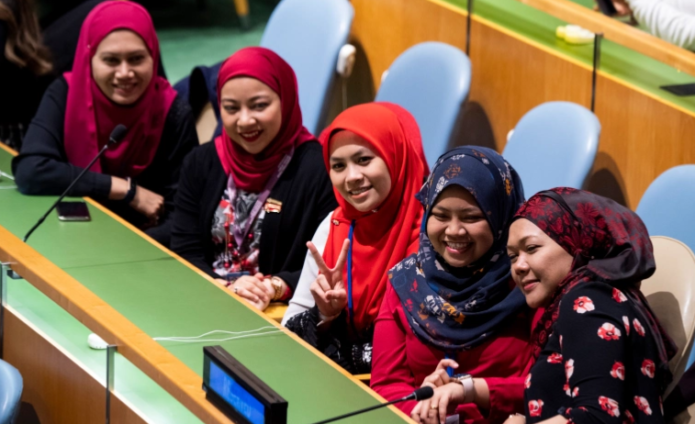 Women pose for a selfie during International Women's Day earlier this year. Progress on women's rights has not been as rapid as hoped following a landmark UN women's summit 25 years ago [Johannes Eisele/AFP]

United Nations Secretary-General Antonio Guterres warned on Thursday against a recent pushback on gender equality and women’s rights and urged people to fight back as the United States condemned China and the world body for “the murder of millions of baby girls”.

While Guterres did not specify who was wary of women’s rights, he said: “Now is the time to push back against the pushback … Women’s full human rights and freedoms are fundamental to peace and prosperity on a healthy planet.”

At the 1995 conference, 189 countries agreed to make a priority the “full and equal participation of women in political, civil, economic, social and cultural life at the national, regional and international levels, and the eradication of all forms of discrimination on the grounds of sex”.

“Twenty-five years after the Beijing Declaration, equality should be a given. But we still have a long way to go,” Merkel said. “Get on board. Let’s work together to really target the Beijing goals. The faster, the better.”

“We need to eliminate prejudice, discrimination and violence against women and make gender equality a social norm and moral imperative observed by all,” Xi said in a prerecorded video.

But US Secretary of Education Betsy DeVos condemned the treatment of women in Venezuela, Cuba and Iran, and saved her harshest criticism for China.

“The worst violator of all in both scope and scale is the host of the conference we commemorate today,” she said in a video statement.

“Since 1995, the Chinese Communist Party has been responsible for the murder of millions of baby girls through brutal population controls on industrial scale, unfortunately with the support (of) UN agencies. We call on the UN to stop ignoring and enabling these atrocities.”

The United Nations and China’s UN mission did not immediately respond to a request for comment on the US statement.

DeVos specifically took aim at Beijing’s operations in its far western Xinjiang region, which some rights groups and politicians in Washington have said could amount to genocide, and condemned practices of sterilisation, abortion and birth control she said had been forced on Uighur women.

French President Emmanuel Macron expressed concern at the slow progress over the past 25 years during which long-agreed international language on women’s sexual and reproductive health and rights has become a point of contention.

“In 2020, the Beijing Declaration would have no chance of being adopted,” Macron said. “Everywhere, women’s rights are under attack, as are human rights, from which they are inseparable.

“Progress achieved by great efforts is being undermined even in our democracies, starting with the freedom for women to control their own bodies, and in particular the right to abortion,” he said, also pointing out inequalities in schooling, pay, domestic work and political representation.

US President Donald Trump’s administration has led a push at the UN against promoting sexual and reproductive health and rights for women because it sees that as code for abortion, and has opposed such language in UN resolutions.

Trump told world leaders at the UN General Assembly last week that his administration is advancing “opportunity for women” and “protecting unborn children”.

Even there, women were noticeable by their absence, with only nine women among the speakers from some 190 countries.

Guterres said that while progress had been made since Beijing, its ambitious vision had not been fulfilled.

“One woman in three still experiences some form of violence in her lifetime. Every year, 12 million girls marry before the age of 18. In some parts of the world, levels of femicide – the killing of women – could be likened to a war zone,” he said.

“Worldwide, on average, women have just 75 percent of the legal rights of men,” Guterres said.

France and Mexico committed to hosting an international forum on women’s rights in Paris next June – a meeting that was scheduled for July of this year but was cancelled due to the pandemic.

DISCLAIMER: The Views, Comments, Opinions, Contributions and Statements made by Readers and Contributors on this platform do not necessarily represent the views or policy of Multimedia Group Limited.
Tags:
China
German
UN Summit
United States
Womens Rights