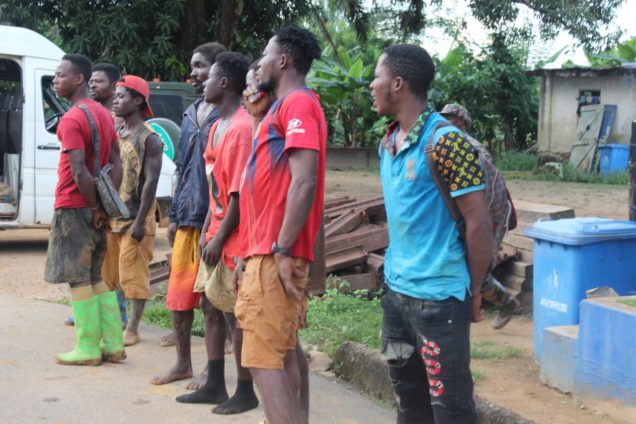 In an effort to complement government’s clampdown on illegal miners, the task force of the Ghana National Association of Small Scale Miners (GNASSM) has arrested 13 persons for illegally mining in the Eastern Region.

The suspects include Ghanaians and other West African nationals.

They were caught mining on the Birim River at Akyem-Mampong near Anyinam, Accra Village Nkatieso and Mokyere all in the Atiwa district.

The taskforce retrieved and destroyed over a hundred chanfai machines, water pumping machines and other mining equipment.

This arrest follows a similar exercise conducted by the Lands and Natural Resources Ministry a few days ago at Birim North and Asante Akyem South districts of the Eastern and Ashanti regions respectively.

The Commander of the small scale miners taskforce, Patrick Don Chebe said the operations took place on Thursday and Friday.

“We came across people who were washing into the rivers directly, so as a taskforce commander I want to assure the public that we are not going to stop this operations, it will continue till they put an end to it. We have arrested 13 people so far most of them are Ghanaians and some few foreigners, investigations are still going on to find out more about these people who have been arrested.”

The General Secretary of the Association, Godwin Armah said the exercise is to support government to clamp down on illegal miners whose activities are against best practices.

“These arrested people are in police custody at Koforidua central police station. We expect the law to deal with these illegal miners who have been arrested to deter others from such act because if these people are left to go free then it means our effort to curb the menace will be in vain.

“Infact. Ghana National Association of Small Scale Miners are very serious about this exercise. We do not intend to prevent people from doing mining but we would have wished we all use the legal laid down means to do mining, this is what we expect from anyone who wants to mine. We expect nobody to mine in our rivers and destroy the water bodies, that is why we are collaborating with the ministry to embark on this exercise with the minister to curb this problem,” he explained

The Communication Director of GASSM. Razak Alhasan said illegal miners will stop at nothing to destroy the rivers in the Eastern Region.

He said the association, will put in every effort to clampdown on them and identify their financiers.

“We are looking for those who sponsored them and sent them to do this illegal mining, some of them don’t even know the names of those who are managing and sponsoring their activities, example was one from Volta region who was not able to identify his boss’ name. These are the people we are looking for, we had information that even some of the chiefs and sub-chiefs are behind these illegal mining activities, we are working hard and we will make sure that all these people are arrested to face the law,” he warned.