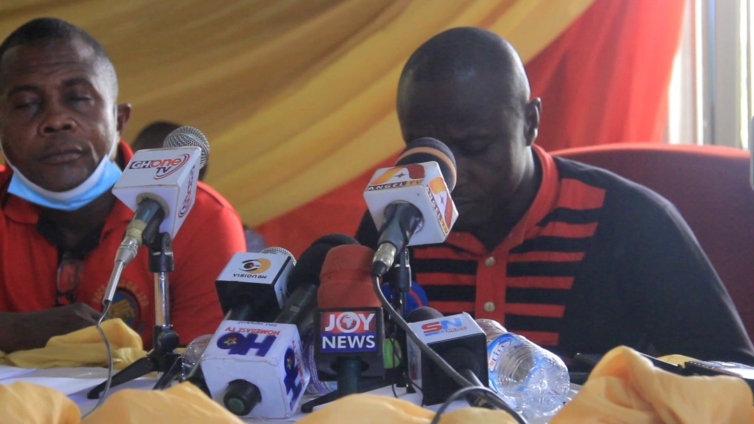 Small scale miners in the Ashanti Region have threatened to sue the government over the burning of excavators owned by their members.

The miners want to seek legal interpretation of the constitution whether a Minister has the right to issue a directive for private business equipment to be destroyed without just cause.

“We are in preparation to institute an action for an interpretation of the constitution at the highest court of the land to find out if a Minister has the right to issue a directive for a private person’s equipment to be destroyed without just cause,” said the Former Ashanti Region secretary of the miners, Philip Bawa.

The miners are also instituting measures to petition Parliament to intervene because it is against the United Nations Convention to unleash military against citizens.

The small scale miners allege there is selective justice in the fight against illegal mining and the destruction of natural resources.

Vice Chairman for Dunkwa Small Scale Miners Association, Benjamin Annan, who was at a press conference organized by the miners, said there are consequences associated with what he believes to be selective justice.

“Why our chairman in Assin Fosu who is mining legally on his concession, they have destroyed four excavators on his land including other equipment. The government is pushing us too hard,” he laments.

The miners claim bigwigs within the governing NPP are engaged in illegal activities in various forest reserves in the country but the government is shielding them from military action.

“Why leave the real mine operators in the forest and attack innocent people? I can confidently tell you about a forest where people are mining but these military men aren’t entering. One of these forests is the Odaho forest. The media should follow-up,” one of the members said.

The association wonders why their legal miners are attacked when they could equally provide a solution to the problem.

“We can’t fathom why the military is burning excavators owned by legal miners.”

They also stated that their operations don’t violate the mining laws or destroy water bodies and the environment.

Members want the government to find better ways of addressing the situation than to use them as scapegoats. The use of the military to allegedly harass them is another issue of concern to the miners.

“This wasn’t the deal. Where from this attack on innocent people? We talked about red zones and other illegalities. Has the government now misinterpreted it to mean a different thing contrary to what we agreed?” Amansie West President Daniel Kwaku Mensah quizzed.

Over 20 excavators and several other properties have been burnt at their different concessions in the Amansie West district.

Mr Mensah urged the President to immediately fix the problem it has caused innocent miners, especially those who operate legally.

But they are ever ready to fight against illegal mining activities that destroy and pollute water bodies at the expense of innocent Ghanaians.

“We are willing to help the government combat this course, but the fact is that the understanding reached during our dialogue is not happening on the ground.”

The miners want the government to be clear on the discussion on the red zone.

“Neither our members mine in the forest nor water bodies. Why then this attack?”

According to them, the mining laws do not allow one’s equipment to be burnt. It is supposed to be seized.

The Association wants the Lands and Natural Resources Minister, Samuel Abu Jinapor to clarify the President’s directive to Ghanaians, whether he ordered the military to burn excavators on-site or seize them?

They intend to go back to their respective mining sites and further seek legal reddress if the government fails to address their concerns anytime soon.

“We are pleading with the government to involve the miners in the fight.”