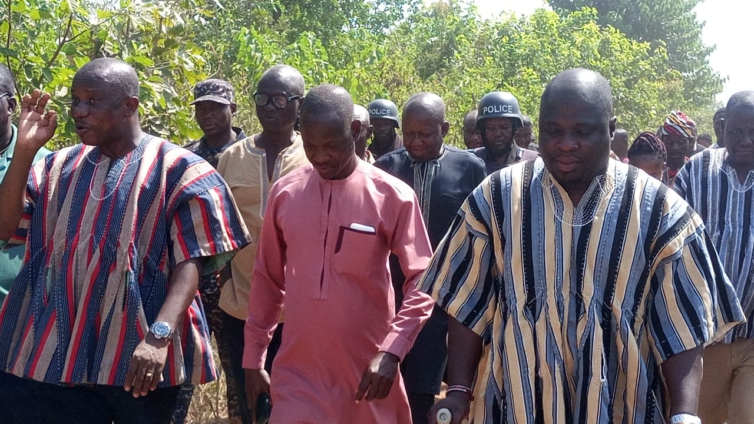 Defence Minister, Dominic Nitiwul has called for justice for the horrific murder of Borae Ahenfie Chief and two other persons in the Krachi Nchumuru District of the Oti Region.

The deceased, late Nana Meebo II and two other persons were shot dead by an unknown assailant on November 19, this year.

Mr Nitiwul, who called on the family members at Borae Ahenfie said the death is a big blow to the family and the country’s democracy.

He said the government would give the security agencies all that they required to do their work in getting justice for the late Nana Meebo II.

“There will be nowhere to hide for the perpetrators, and they will surely be brought to book,” he assured family members.

He again called on the family of the late Nana Meebo and the entire youth in Krachi Nchumuru District, who are still in pain over the gruesome murder of their chief and other two persons to exercise restraint and cooperate with the security agencies to continue doing their work towards the arrest of the killers.

Mr Solomon Kuyon, the Member of Parliament (MP) for Krachi Nchumuru, condemned the incident and assured of his utmost support for the security to ensure the perpetrators are arrested to face the law.

He described the occurrence as unfortunate and will not allow any group of people to destroy the sanity and sanctity of the area.

Nana Mambo Chachai, on behalf of the opinion leaders, expressed gratitude to the Defence Minister and his entourage for the visit and encouragement and assured the Minister and the security agencies of their commitment and support for thorough investigations.

DISCLAIMER: The Views, Comments, Opinions, Contributions and Statements made by Readers and Contributors on this platform do not necessarily represent the views or policy of Multimedia Group Limited.
Tags:
Borae Ahenfie
Defence Minister Dominic Nitiwul