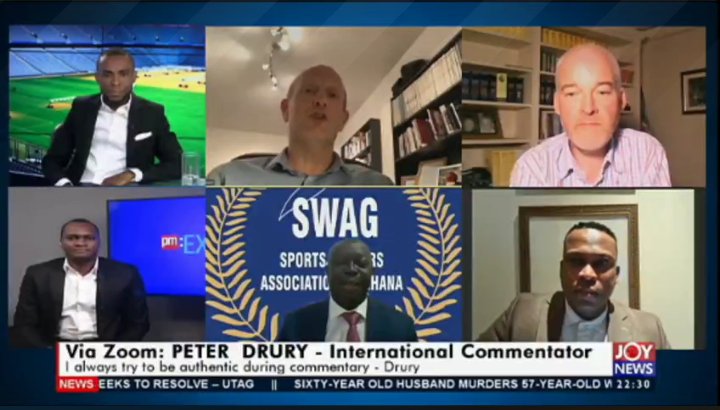 Trending Number 1, 2 and 3. Indeed the sports edition of the Joy News’ PM Express show lived up to expectations on Tuesday night.

The special edition hosted by Joy Sports presenters Gary Al-smith and George Addo Jnr saw leading football journalists in Ghana and the world share their thoughts on the beautiful game which has been slowed by the novel coronavirus pandemic.

Kwabena Yeboah, Ghana’s finest football commentator gave his perspective on the topic, Football After Covid-19, from the Ghanaian angle and earned massive praise. It’s no surprise that he trended number 2 on Twitter behind the official hashtag for the show #PMExpress.

The hype of the show had been built around famous Premier League commentators, Peter Drury and Jon Champion.

Drury who has massive following in the West African country, shared impressive thoughts on the topic.  Drury trended number 3 on Twitter.

For Jon Champion, one of the Premier League’s longest-serving commentators, he brought his vast knowledge to bear on the topic with former SuperSport presenter, Robert Marawa not left out of the well-produced show by the Joy Sports team.

Below are some social media reactions.