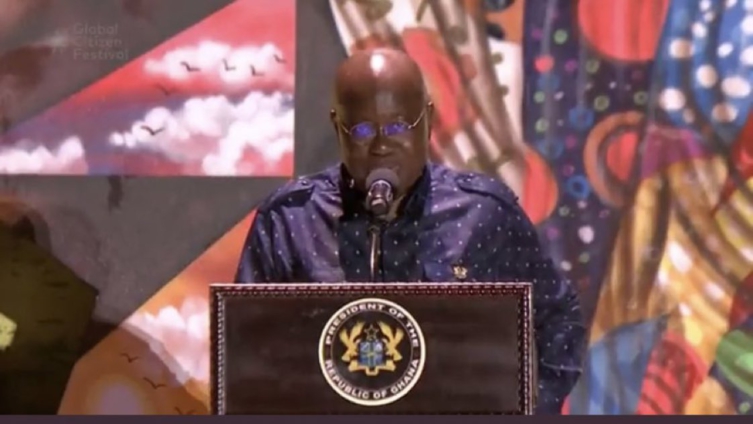 Social media is rife with concerns over the unfriendly reception given to President Akufo-Addo at a musical concert over the weekend.

During the just-ended Global Citizen Festival, the president had been introduced to tout the government’s moves in prioritising women empowerment among other causes in line with the organisers’ mission for social justice.

But even before the president could make his point, the crowd of youthful revellers chanted against his presence.

President Akufo-Addo booed during his speech at the Global Citizen Festival in Accra. pic.twitter.com/57XYhsN4vO

They booed at him while others shouted ‘away!’ as he finished his speech.

Some of the attendees also took to social media to clarify that their heckling was a show of disapproval for the economic hardship suffered in the country under his leadership.

Visuals have since surfaced on social media showing the incident.

Mr President , for their selfish goals, chiefs, paid praise singers and sycophants will continue to sing insincere praises of you. But what you heard at the #globalcitizensfestival is the truest voice of the people, a referendum on your regime. You have two years to salvage it.

As I was booing at Nana Addo some stupid girl, of a girl, girl girl said I should be disappointed disappointed in myself! What I did to her! I’m so pained @gambi_know had to cut the video short! Meanwhile u are suffering.
Back to regular setting – shame on the president of Ghana pic.twitter.com/SA1jVUVCM8

The president of Ghana, Nana Addo Dankwa Akufo-Addo, being heckled at the GLOBAL CITIZEN FESTIVAL in Accra,Ghana #trending #Ghana pic.twitter.com/z61EPStOU2

Patrons at Global Citizen Festival hoot at President Akufo-Addo when he mounts the stage to deliver a speech. #HappyGhana #HappyHMS pic.twitter.com/qM2w6AguBr

DISCLAIMER: The Views, Comments, Opinions, Contributions and Statements made by Readers and Contributors on this platform do not necessarily represent the views or policy of Multimedia Group Limited.
Tags:
Global Citizen festival
Nana Akufo-Addo
Social Media
Youth