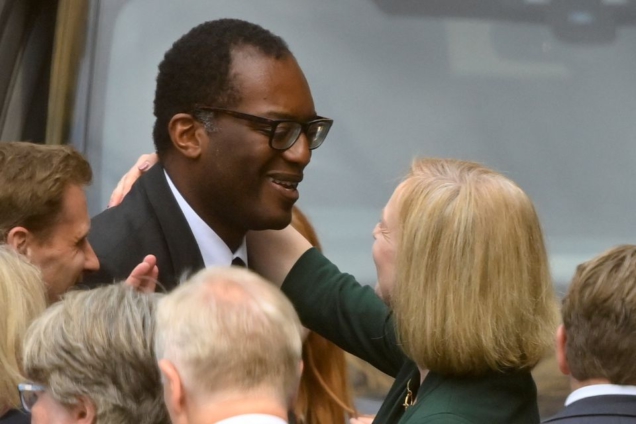 Scores of Ghanaians have taken to their social media handles to react to the dismissal of Ghanaian-born Kwasi Kwarteng as UK’s Finance Minister.

In a spree of comments monitored by JoyNews, the concerned citizens expressed varied opinions about the news of his sacking.

While some have sympathised with him, others have blamed him for his lack of discretion.

Personally I think Liz Truss, Kwasi Kwarteng, Suella Braverman et al are doing a really fine job for the Conservative Party
We just need a General Election so the rest of us can give them feedback

Liz Truss has sacked Kwasi Kwarteng for implementing her policies.

Her position is totally untenable.

She has to go too — and she should take the whole rotten lot of them with her.

Every single one of those tories and those in the media who came out with:
“The PM has total confidence in Kwasi Kwarteng, he is incredibly capable person, very very bright, he makes good judgment calls” need sacked.

Kwasi Kwarteng is no longer chancellor, the BBC has reported.

This comes after speculation that the British Prime Minister, Liz Truss will on Friday announce a U-turn on parts of the mini-budget.

With his sacking, it means Kwarteng is the second shortest-serving UK chancellor on record.

The shortest serving chancellor, Iain Macleod, died of a heart attack 30 days after taking the job in 1970.

Since 2019, the UK has had four chancellors, including Nadhim Zahawi who served the third shortest tenure with 63 days during a short-lived reshuffle under Boris Johnson, and Sajid Javid who served 204 days – the fourth shortest tenure since the Second World War.

Here’s a quick recap of his political career:

Superlatives get overused in political reporting, but this is genuinely astonishing.

Liz Truss and Kwasi Kwarteng are old friends, and from the same wing of the Conservative Party.

And yet their entire political programme rests above the shredder, and now the chancellor is out.

Out after less than 40 days.

And a news conference in Downing Street beckons, at a time of financial instability, and the UK does not have a chancellor of the exchequer.

The prime minister will not want to face questions until she can answer the one about who runs the Treasury.

Some in the party are arguing that the key thing she should be looking for in a new chancellor is instant credibility, to steady the markets.

There are two people who are former chancellors on the Conservative backbenches.

But one is called Rishi Sunak, so we can rule him out of wanting to come back, and the other is Sajid Javid.

DISCLAIMER: The Views, Comments, Opinions, Contributions and Statements made by Readers and Contributors on this platform do not necessarily represent the views or policy of Multimedia Group Limited.
Tags:
Britain
British pound
Kwasi Kwarteng
UK