Soldiers who invaded Parliament must be court marshalled – Ras Mubarak 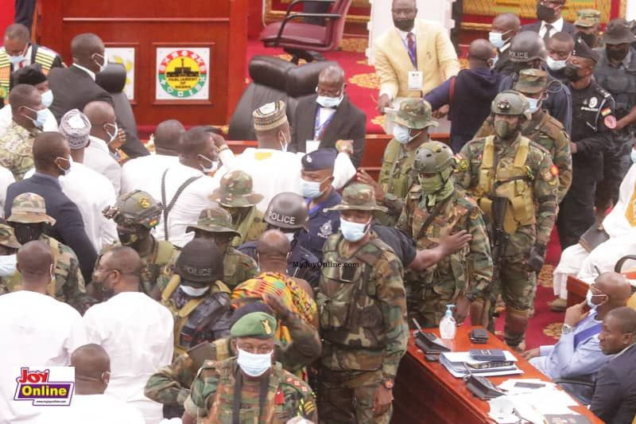 Former Member of Parliament (MP) for Kumbungu Constituency, Ras Mubarak has called for a probe into why some military personnel invaded Parliament last Thursday dawn.

Legislators, during the inauguration of the 8th Parliament, were caught by surprise when some military officers trooped onto the floor during a heated a highly-tense election of Speaker.

According to the former MP, the move was nothing but an “attempted Coup d’etat” and wants culprits to be punished accordingly.

“And I think they have to be court marshalled and dealt with in accordance with military law, ” he said.

The military stormed the Chamber, supposedly to restore calm amid confusion that erupted between legislators of the New Patriotic Party (NPP) and the National Democratic Congress (NDC) in the House.

But speaking on PM: Express on JoyNews Tuesday Ras Mubarak noted aside MPs and Clerks, one cannot barge into Parliament without an invitation by the Speaker.

“We have instances where even staffs of Parliament can’t enter the Chamber unless they’ve been expressly given permission.”

However, there was no speaker at the time, so who invited the military officers to Parliament.

“We don’t know who called them in and that’s the more reason why we need to take an interest in seeing the conclusion of this particular matter,” Mr Mubarak said.

He stressed: “the military has to be investigated thoroughly, those who are found culpable, those who gave the order, and those who got involved should be punished in accordance with the existing legislation.”

The Former MP wants his colleagues to exhibit prudence and uphold the country’s house of Chamber, going forward.

“Never again should our great country witness such disrespect, such disdain for the institution of Parliament.”

DISCLAIMER: The Views, Comments, Opinions, Contributions and Statements made by Readers and Contributors on this platform do not necessarily represent the views or policy of Multimedia Group Limited.
Tags:
8th Parliament
military officers
Ras Mubarak