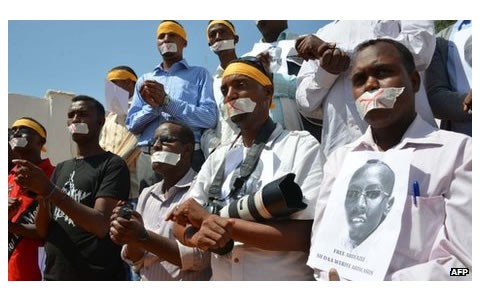 A woman who accused Somalia’s security forces of rape has been given a year jail term for making a false accusation and insulting a government body.

The journalist who interviewed her about the alleged rape, but did not report the story, was also found guilty by a judge in the capital, Mogadishu.

Judge Ahmed Aden Farah said the woman would not go to jail immediately as she is caring for a young child.

A BBC reporter in Mogadishu says there has been an angry reaction to the case.

Many human rights groups and journalists say it is politically motivated, the BBC’s Mohamed Mwalimu reports from Mogadishu.

Judge Farah said the court based its decision on medical evidence that the woman was not raped.

The woman had reported the alleged rape at a police station in Hodan, a district in Mogadishu where many displaced people live.

“We sentence her for offending state institutions by claiming she was raped,” the AFP news agency quotes the judge as saying.

“She will spend one year in prison after finishing the breast feeding of her baby.”

Charges against the woman’s husband and two others, who allegedly helped introduce her to the journalist, were dropped.

The journalist, Abdiaziz Abdinur Ibrahim, has been in detention since 10 January – two days after his interview with the woman.

The police alleged he collected material for a news report by al-Jazeera about rape in camps for displaced people in Mogadishu. The Qatar-based news network has said Mr Ibrahim was not involved in its story.

Prosecutors also alleged that the woman and her accomplices had been paid by the journalist to lie.

Last month, the UN special representative on sexual violence, Zainab Hawa Bangura, said the Somali government’s approach to the case did not “serve the interest of justice; it only serves to criminalise victims and undermine freedom of expression for the press”, AP news agency reports.

Last September, a new president was elected by MPs in a process backed by the UN.

The new government is trying to rebuild Somalia after more than 20 years of conflict which saw clan-based warlords, rival politicians and Islamist militants battle for control of the country.