Some Colleges of Education students resort to group discussions, personal studies as CETAG and CENTSAG lay down tools 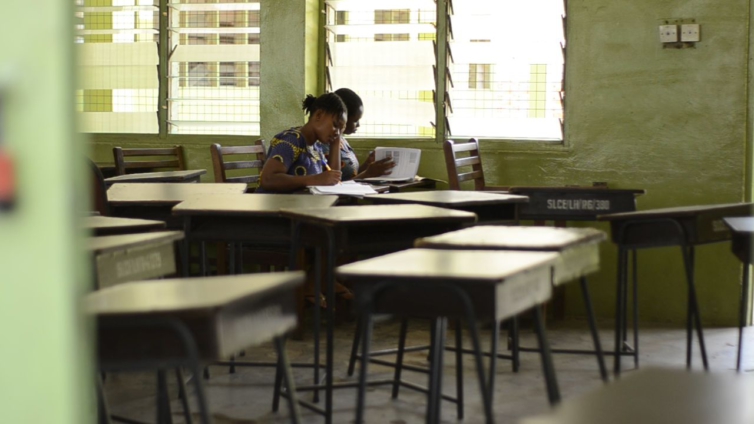 Students at some colleges of education in the Ashanti region are resorting to personal studies and group discussions in classrooms as their teachers and non-teaching staff embark on an indefinite strike nationwide.

The National councils of both teaching and non-teaching staff at the colleges of education laid down their tools after the government failed to implement the agreed 2022 conditions of service, postponing it to 2023.

When the Luv News team visited the St. Louis College of education, Mbrom at 10 am, literally every academic activity was grinding to a halt.

It is typical to find students actively engaged in class lessons at such hours, but teachers have boycotted class to vent their displeasure at the government for failing to address their demands.

The Fair Wages and Salaries Commission’s decision to unilaterally sign off a memorandum of agreement is one of the major concerns fueling their decision.

Local representative at the St. Louis College of education, Paul Mensah said that in 2021, they negotiated with the government on our conditions of service and the agreed demands were supposed to take effect this year.

“Negotiations have ended but the government has dragged its feet up until now, failing to honour our demands. When we were supposed to go in and sign the memorandum of agreement, the government wrote to us stating that the implementation will be taking place 2023. This was done without our consent,” he stated.

In a classroom, some students were busily involved in group discussions on science education topics and other disciplines as they prepared feverishly for their imminent exams.Students who wish to catch up and stay afloat with lessons in class also refer to the library for their personal studies.

But, according to authorities, the serene environment will soon be closed to the students as the non-teaching staff also make their demands.Benjamin Saah is the local CENTSAG representative for the college.

“Our members who hold a first degree are not paid commensurate with their colleagues in other tertiary institutions, i.e. the universities. When you come to the colleges of education, the non-teaching staff who hold the same degree as those in the universities are placed on level 16th low on the single spine salary structure. But our salaries are fixed. People cannot just make ends meet. Some of them who use motor bikes have had to pack them,” he said.

At the Wesley College of Education – Tafo, whose centenary anniversary is just at the corner, offices remain closed while students help with preparation for the school’s anniversary.

The students are however worried the strike if not called off immediately would adversely affect them.

“The strike is really going to affect us after the celebration. We won’t be able to go for lectures, we really need the tuition to impact knowledge into the students,” one of the students said.

The student teachers are not only affected by the halt in teaching activities. Their daily food rations have stopped coming because of the strike.

“This morning we were supposed to have our breakfast. When I went to the dining hall there was nothing happening. The place was so quiet. They are not feeding us. We need food. We need the teachers urgently,” Claudia Appiah, SRC President of St. Louis College, noted.

The association says it is not backing down on its decision until their demands are met.Francis Kyei Badu is the local CETAG chairman at the Wesley College of Education.

“Until we see positive results, we are not backing down. Until drastic conditions of service and improvements of our conditions are implemented, we have declared an indefinite strike,” he said.

The teachers and non-teaching staff at the 46 colleges of education nationwide are anticipating that the government sticks to the highlighted conditions of service as agreed upon.

DISCLAIMER: The Views, Comments, Opinions, Contributions and Statements made by Readers and Contributors on this platform do not necessarily represent the views or policy of Multimedia Group Limited.
Tags:
CETAG
Strike
Students