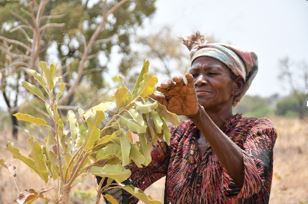 Several communities in the Upper East and Savannah regions, the focus of the European Union-funded Landscapes and Environmental Agility Across the Nation (LEAN) Project, are deriving multiple benefits from the project’s interventions.

“The multiple benefits derived from the project interventions were contributing to strengthening the environmental agility and enhancing communities’ adaptive capacity against climate change,” said Joseph Yelkabong, the project manager at World Vision Ghana.

Before the project intervention, these communities experienced losses to their animal fodder and populations and sources of livelihoods, in addition to suffering from severe socio-economic problems such as high rates of poverty, low incomes, poor nutrition, food insecurity, gender inequality, and land degradation.

These factors, exacerbated by climate change, were putting the livelihoods of the people in these primarily rain-fed, agriculture-dependent populations in jeopardy. However, the LEAN Project’s interventions have begun to transform these factors by restoring landscapes, improving biodiversity, forest cover, and soil nutrients for improved agriculture and fodder.

For a farmer such as Alubayia from Navio-Tigakuri, the LEAN project is the future.

“You can visibly see the difference between the land we started working on and the parts we haven’t worked on. Even though the project has not been long. We are starting to see trees such as the shea tree growing, and we trust that pruning exercises will enable them to fruit well”.

Alubayia is not the only one witnessing the changes the project is creating.

According to Abadu, “Being a woman, shea nuts picking is our major source of income and livelihood. We could roam the whole land and would barely find shea nuts to pick because of bushfire. Since we learned not to burn the bush after participating in the LEAN Project’s training, we are witnessing the regrowth of the vegetation. Shea trees are now doing very well. This project is bringing back our livelihood and income through shea nut harvesting. “

“Formerly, there were wild fruits that used to be in the forests when I was young. Because of the burning of bushes, these fruits have become very hard to find. Since we started pruning and conserving the land, I have seen a few of these fruits springing up once again”.

Adding his voice, a resident, John said, “this initiative has prevented our animals from going far to graze and getting lost because they now have enough fodder closer to our village to feed on.”

Stopping indiscriminate tree cutting, bush burning, coupled with tree planting and nurturing and adoption of good environmental practices such as conservation agriculture, and tree pruning were not only helping to boost environmental agility but also restoring livelihoods of the beneficiary communities in the Kassana-Nankana and West Gonja Districts in the Upper East and Savannah region respectfully.

The EU-funded LEAN is a four-year project that is being implemented in Ghana by World Vision Ghana, Rainforest Alliance, Tropenbos Ghana, and Eco-Care Ghana. It aims to conserve biodiversity, build climate resilience, and reduce emissions from land-use changes in the savannah, high forest, and transition zones of Ghana while helping local farmers to improve their livelihoods.

It is also addressing three structural barriers that have historically hindered efforts by governments, civil society organizations, and the private sector to halt land degradation and deforestation through the uptake of landscape approaches.

DISCLAIMER: The Views, Comments, Opinions, Contributions and Statements made by Readers and Contributors on this platform do not necessarily represent the views or policy of Multimedia Group Limited.
Tags:
EU
Lean Project
Savannah region
Upper East Region