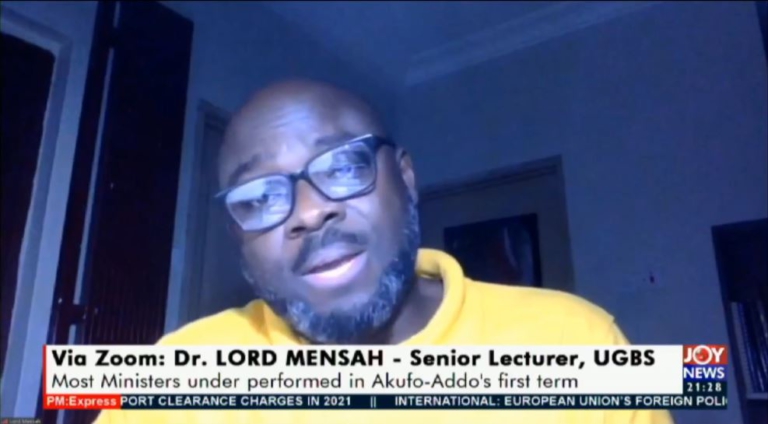 A senior lecturer at the University of Ghana Business School has noted that most ministers under the Akufo-Addo led government performed below expectation in his first term of governance.

President Akufo-Addo in his first term appointed 125 ministers which according to him, will accelerate the government’s development agenda.

But assessing their performance on PM Express Monday, Dr Lord Mensah said the benefit derived from the appointees were not perceptible after the four-year term.

“If you marry these two, clearly, you will realize that most of the ministers were performing below value for money.”

He said although Akufo-Addo had expressed his commitment to protect the public purse by ensuring value for money, the rhetoric did not play out with the ministers.

Dr Mensah said corruption is another cost which is overlooked, “we isolate it from the ministerial position.”

The senior lecturer, however, emphasised the need to marry “the number of corruptions that will go on in your ministry, added on to the cost that we use in decorating you as a minister,” to the benefit that gained from the ministry at the end of the four years in office.

“If you marry the two, you will realize that effectively, chuck of the ministers did not perform,” he stressed.

Dr Mensah also observed that some Ghanaians have assumed a culture of making wealth through politics, hence the level of corruption exhibited.

“The Ghanaian culture has come to understand that if you are in politics, you need to be well decorated.”

He further expressed disappointment in some six Acts passed in Parliament between 2017 and 2018 to help eradicate corruption, questioning their effectiveness.

“Witness Protection Act 2018 959, the Office of the Special Prosecutor Act, the Corporate Restructure and Insolvency Act, the Public Financial Management and Regulation Act, Right to Information Bill, and the Company’s Act, but the question is where they biting?”.

DISCLAIMER: The Views, Comments, Opinions, Contributions and Statements made by Readers and Contributors on this platform do not necessarily represent the views or policy of Multimedia Group Limited.
Tags:
Akufo-Addo First Term
Dr Lord Mensah
PM Express