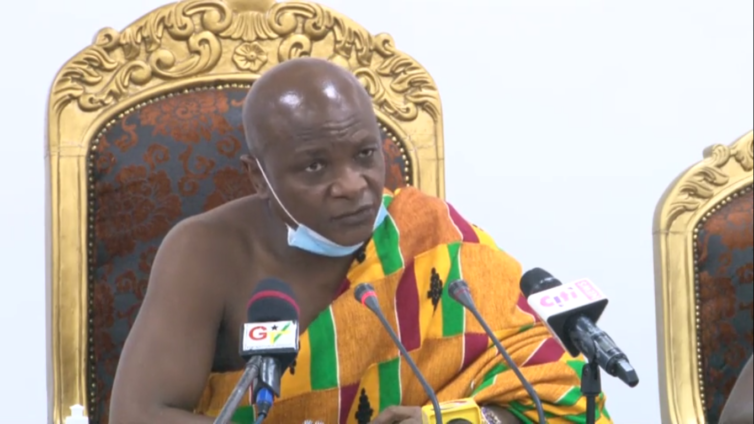 According to the traditional ruler, the claims by the ace broadcaster on the number of times he attended meetings as a member of the Council of State, are not true.

Speaking in an exclusive interview with JoyNews’ Maxwell Agbagba on Thursday, Togbe Afede explained that contrary to Paul’s claims, he was ‘one of the active participants’ in the Council of State, during his period of service.

He also revealed that even though he was alarmed by Paul’s remarks, he is not surprised because Paul did a similar thing in the past.

The Paramount Chief of the Asogli Traditional Area, Togbe Afede further intimated that, “It’s a surprise that he of all people. When I say he of all people, he’ll know why I’m saying I didn’t expect that from he of all people. But unfortunately, some people live by their stomachs in the kind of things that they do. So given my recent experience, I’ll say I’m not too surprised”.

During an editorial on Good Evening Ghana on Tuesday, Mr. Adom-Otchere alleged that based on facts available to him, the Agbogbomefia of the Asogli State and former President of the National House of Chiefs, Togbe Afede attended only 16% of meetings during his tenure as a member of the Council of State.

In his opinion, even though the move has been hailed on social media as a patriotic gesture, he does not understand the essence of the praises which were showered on the traditional leader.

As result, the Good Evening Ghana host criticised Togbe Afede and urged the public to desist from praising him since the refund of his ex-gratia does not put him on any ‘moral high ground’.

But in his reactions in an exclusive interview with JoyNews, Togbe Afede emphasised that he was not comfortable with the ¢365,000 extra-gratia which was paid to him for serving on the Council of State between 2017 and 2020.

In offering his clarification, he stressed that while working on the Council, he was given his monthly salary and other privileges and therefore the ex-gratia was not necessary.

Togbe Afede added that, working on the Council of State is largely a part-time job, which should not be accompanied by such huge end of service sums.

In a letter written in response to comments by Mr Adom-Otchere on Wednesday, the Asogli State Council emphasised that Paul lied about the number of times the traditional leader attended meetings while serving on the Council.

It is on the back of this that social media was buzzing, commending the traditional leader.

But in an editorial on Tuesday evening, Mr Adom-Otchere described the Paramount Chief’s conduct as populist and unnecessary.