Two white South African farmers who forced a black man into a coffin have been convicted of attempted murder and kidnapping.

Victor Mlotshwa, 27, was beaten and made to get into the coffin by Theo Martins Jackson and Willem Oosthuizen in August 2016.

The pair will be sentenced on 23 October. They had denied the charges.

The case has caused outrage in South Africa and highlighted racial tensions in some farming communities.

Africa Live: More on this and other stories

Mr Mlotshwa only reported the matter after footage of the assault emerged on YouTube months later.

His attackers threatened to douse him in petrol and burn him alive. 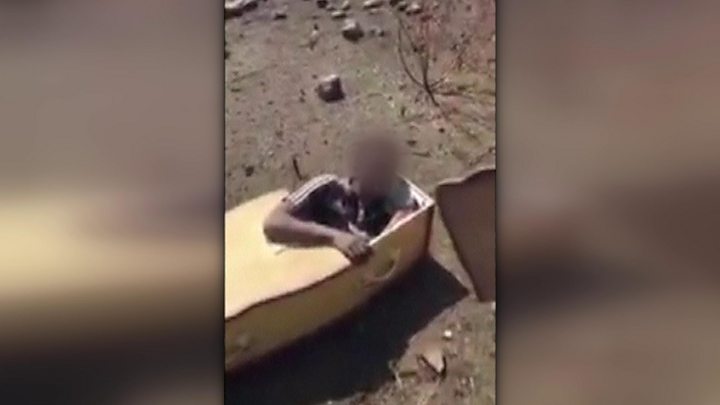 In a court affidavit, Jackson and Oosthuizen said they did not mean to harm Mr Mlotshwa but merely wanted to "teach him a lesson".

They claimed that Mr Mlotshwa had been trespassing on their land.

He denied this, saying he was taking a short cut to the shops, where he had been sent by his mother.

As Judge Segopotje Mphahlele read out the guilty verdict in Middelburg Magistrates Court on Friday, supporters of the victim burst into songs of celebration.

"I'm relieved that justice has been served," Mr Mlotshwa told the BBC. 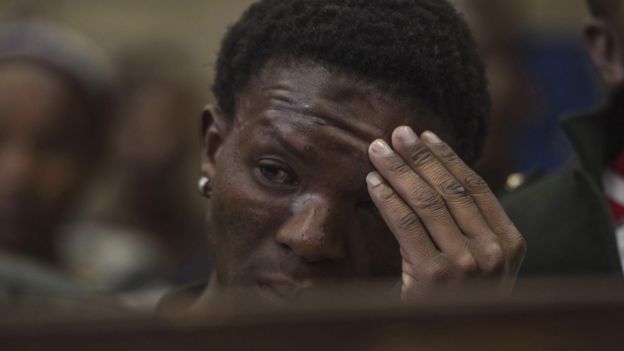 Judge Mphahlele told the court she was satisfied that the prosecution had proved its case beyond a reasonable doubt, and that it was clear that the convicted men intended to kill the victim.

The prosecutor has asked the court to revoke their bail for security reasons.

Shortly after the guilty verdict was delivered to a packed courtroom, the visibly emotional victim, Victor Mlotshwa, told me he was relieved:

"I feel good about the outcome. I'm not saying all white South Africans are racist, but the court must set an example to those who commit such acts."

The video of the assault caused outrage here in South Africa. At one point during Mr Mlotshwa's ordeal, his attackers threatened to bury him alive, even going as far as asking him if he wanted to die fast or slowly.

"The ordeal left my son deeply traumatised… and I'm happy that his attackers have been found guilty," she said.

"All I'm asking is for harsh prison sentences for these men."

Family members of the convicted men were also in court. Willem Oosthuizen's wife broke down, saying she was shocked by the outcome.

The victim and his attackers live in the same province of Mpumalanga, which is seen as synonymous with such attacks, and many of these incidents go unreported due to fear or intimidation.

It is believed that some white farmers attack their black employees, who never report them to police because they fear losing their jobs.

Many hope that those who commit such crimes will be harshly dealt with by the law.