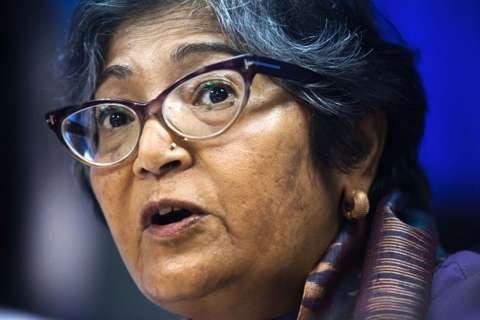 A UN panel of experts on human rights in South Sudan has called on the government to investigate and prosecute top officials for their alleged role in sexual violence.

It said the government should immediately remove from office and investigate state governors and county commissioners linked to systematic rape.

The panel made the call during the ongoing international conference on preventing sexual violence in conflict being hosted in London.

“Nowhere in the world do you find so many women who experience conflict by being repeatedly gang raped… while the men responsible are promoted and rewarded,” said Yasmin Sooka, the chairperson of the panel.

“This year we have seen the most dehumanising sexual violence in South Sudan for which the government bears responsibility because of its failure over many years to hold individuals accountable,” said Prof Andrew Clapham, another member of the panel.

He singled out Unity state as among the areas most affected.

A delegation from the South Sudan government is also attending the conference. But they have not issued any official statement in response to the panel’s statement.

DISCLAIMER: The Views, Comments, Opinions, Contributions and Statements made by Readers and Contributors on this platform do not necessarily represent the views or policy of Multimedia Group Limited.
Tags:
Sexualm violence
South Sudan
Top offcials