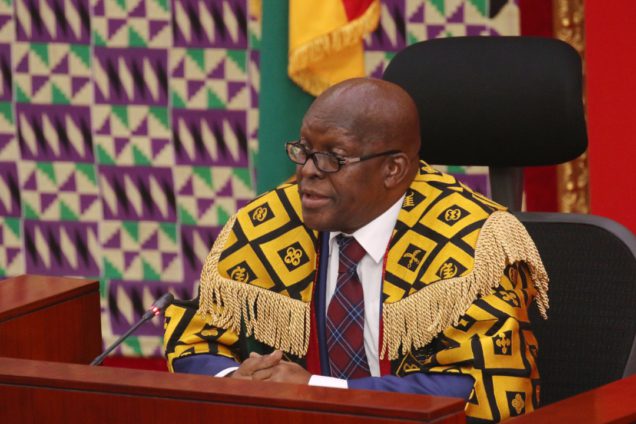 On Tuesday, the Minority filed a motion to that effect following the Majority MP’s demands to have the Finance Minister and the Minister of State in charge of Finance at the Ministry of Finance, Charles Adu Boahen dismissed.

According to them, Mr. Ofori-Atta is incompetent and is to blame for the current economic woes of Ghanaians.

Speaking exclusively to JoyNews, Minority Leader Haruna Iddrisu said they are hopeful by 10th November, they can conclude processes to remove the Finance Minister.

“The motion has been admitted by the Speaker and therefore it would have to go through the requirement of the Constitution. Notice for at least seven days before we move the motion. So between now and 10th November- the Constitution requires that it is done within 14 days,” he said.

Meanwhile President Akufo-Addo has met with the Majority MPs who called for the dismissal of Mr. Ofori-Atta. It was agreed after the meeting that the Finance Minister be allowed to conclude negotiations with the International Monetary Fund (IMF) before any discussion on resignation would be held.

In this regard, Majority Leader, Osei Kyei-Mensah-Bonsu in an interview with JoyNews said the Majority MPS have accepted the plea to allow Finance Minister, Ken Ofori-Atta, and Minister of State at the Finance Ministry, Charles Adu Boahen stay in office till after the IMF negotiation is done.

Per the press statement released by the Majority, the Minister of Finance will stay in office “until the conclusion of the round of negotiations with the International Monetary Fund (IMF) and the presentation of the Budget Statement and Economic Policy in November, 2022 and the subsequent passage of the Appropriation Bill after which time the demand will be acted upon.”

Reacting to this, the Minority Leader, Haruna Iddrisu criticised the NPP MPs for accepting the President’s request.

According to Mr. Haruna Iddrisu, more time won’t save the Finance Minister, adding that “they [Minority] want to know when he will quit.”

“They are asking for time, time to do what?  If he completes the IMF project and budget, who implements it? That would further create uncertainty in the market and can affect the performance of the cedi,” he stated.

DISCLAIMER: The Views, Comments, Opinions, Contributions and Statements made by Readers and Contributors on this platform do not necessarily represent the views or policy of Multimedia Group Limited.
Tags:
Minority in Parliament
Minority leader Haruna Iddrisu
Speaker Alban Bagbin