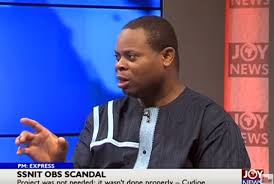 The President of IMANI Africa, Franklyn Cudjoe has called on the Special Prosecutor to investigate the alleged incident involving a wealthy businessman who attempted to influence the legislators who called for the Finance Minister’s dismissal.

According to him, the action of the said businessman flies in the face of the laws of the country.

Thus, the issue must be investigated and the perpetrator, if found culpable, must be made to face the full rigours of the laws.

“That incident should be investigated by the Special Prosecutor so that we get to the bottom of it,” he said on Joy FM’s Super Morning Show on Wednesday.

On Monday, Majority Leader, Osei Kyei-Mensah-Bonsu revealed that when some of the Majority MPs called for Ken Ofor-Atta’s dismissal, one of Ghana’s wealthy businessmen approached them to plead on behalf of the Minister.

In an interview with JoyNews, the Majority leader explained that in the heat of the arguments in Parliament, the said businessman met some of the legislators and “tried to do something.”

Mr. Kyei-Mensah-Bonsu’s assertion was corroborated by the Asante Akim North MP and one of the lead voices for Ken Ofori-Atta’s dismissal, Andy Appiah-Kubi.

Giving a blow-by-blow account, he said the wealthy businessman offered a ‘fat’ envelope which contained some undisclosed amount of money for the MPs to back off from their demand.

The two politicians, however, refused to disclose the identity of the businessman.

When asked for possible reason why they would not mention the name of the businessman, Mr. Cudjoe said it could be that the MPs fear losing financial support for their various campaigns.

“As it is in politics in every part of the world, there are obviously interests and in some regard they operate in such a way that their fortunes are often tied to the existence of certain powerful forces within government.

“So I wasn’t particularly surprised to hear about these accusations at all,” he stated.

DISCLAIMER: The Views, Comments, Opinions, Contributions and Statements made by Readers and Contributors on this platform do not necessarily represent the views or policy of Multimedia Group Limited.
Tags:
Franklyn Cudjoe
Special prosecutor