Sri Lankans are up in arms over the alleged dumping of hazardous waste from Britain, including syringes and suspected human remains from mortuaries.

The government has urged Britain to immediately take back more than 100 containers sent to the island nation that contained the putrid waste mixed up amid mattresses, clothes and plastics.

Many of the containers are believed to have arrived from the UK as far back as 2017. According to reports they were only inspected last week after port officials complained that 111 containers abandoned by an importer were emitting a horrible smell.

“Some of the materials have been liquidised and deteriorated to the point that we cannot even examine them and the waste is emitting a bad odour,” Customs Department spokesman Sunil Jayaratne told Sri Lanka’s Daily Mirror newspaper.

Authorities said on Tuesday that they had taken “immediate action to order the re-export of the 111 containers abandoned at the port”.

But on Wednesday, the UK’s Environment Agency told the BBC that while it was investigating what had happened, it was yet to receive any formal request from Sri Lankan authorities to repatriate the waste.

Mr Jayaratne said a Sri Lankan businessman had imported the containers and would be responsible for re-exporting them.

This is just the latest case of an Asian country angered by the dumping of waste by Western nations disguised as recycling. 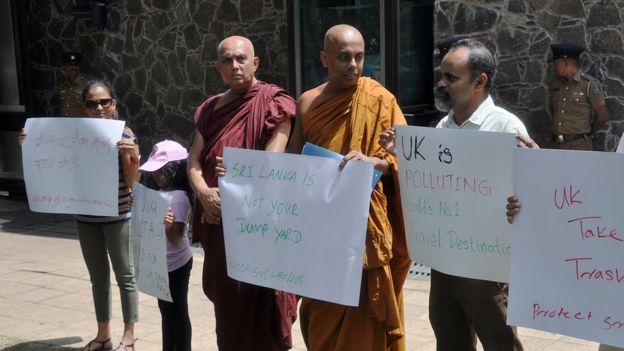 “How can we be responsible for somebody else’s garbage?” one demonstrator asked

China’s decision in January 2018 to no longer accept foreign plastic waste for recycling has upended the global industry and led to a surge in exports to other developing countries.

In May, the Philippines sent 69 containers of refuse back to Canada that it said had been falsely labelled as plastic recycling.

Earlier this month, Cambodia announced it would send 83 containers packed with rubbish to the US and Canada. “Cambodia is not a dustbin,” a government spokesman said.

There have been similar cases in Indonesia and Malaysia in recent months.

The UK government told the BBC it was “committed to tackling illegal waste exports”.

“Individuals found to be exporting incorrectly described waste can face a two-year jail term or an unlimited fine,” an Environment Agency spokesperson said.

‘Not your dump yard’

Photographs and videos of officials inspecting the containers have ignited a social media storm in Sri Lanka.

Amid the growing anger, a small group of environmentalists and a few Buddhist monks held a protest outside the British High Commission in Colombo on Wednesday.

“Sri Lanka is not your dump yard,” one sign read.

Dozens of police including riot control officers were deployed as a precaution – though they outnumbered the protesters.

A small group was allowed to enter the High Commission to hand over a letter asking Britain to take back the containers.

“I am here to protect the future of my country and my children. We are finding it difficult to dispose of our own garbage,” said Manjuri Sumitrarachi, a protester who came with her family to take part in the demonstration.

“This is a third-world country, we are struggling with so many issues, and how can we be responsible for somebody else’s garbage?”

The decomposing waste has triggered concerns about water contamination as the port is close to an estuary.

“We understand that the waste contains some chemicals. There was a video showing how some of the waste material is seeping out,” said Avishka Sendanayake, a consultant on climate change who took part in the protest.

“I want the UK government to take responsibility and we want the Sri Lankan authorities to send them back.”

The UK Environment Agency, however, said it could only repatriate waste if it could be proved it was illegally exported directly from England; if those who exported it either couldn’t be identified or refused to bring it back; and a formal request from the foreign authority was made.

There would also be sanctions against those responsible for illegally exporting it, the agency said.