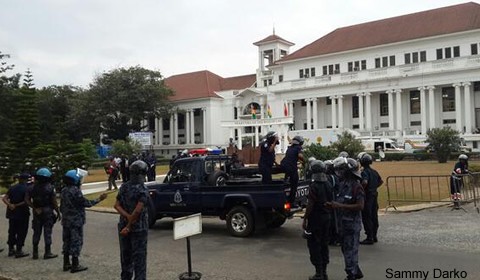 Over 150 lawyers at the Attorney General's office say they are tired of the disappointment and contempt shown to them by the Finance Ministry having started negotiations for over a year.

After a botched meeting with the Chief of Staff Julius Debrah at the presidency and a subsequent one with the Deputy Finance Ministry, Ato Forson Monday, the lawyers decided it was best for them to go on strike.

A member of the aggrieved lawyers Charles Ofori told Joy News' Dzifa Bampoh there was no consensus reached with the two men and they had no choice but to lay down their tools.

The strike takes immediate effect, Ofori noted. The principal state attorneys, assistant state attorneys and other lawyers at the AG's office will from tomorrow not go to the courts until there is a firm commitment by government to resolve their grievances.

Charles Ofori was not particularly happy with the comment by the Deputy Finance Minister that the Ministry was going to set up a committee to look into the claims of the lawyers.

He could not understand how the Ministry would now seek to set up a committee to investigate the matter when they have been negotiating for a raise over the past 12 months.

According to him, they have gone to the Labour Commission with the complaints and several attempts to get the Finance Ministry to respond have proven futile.

The strike will no doubt affect the administration of justice across the country. Only recently members of the the Judicial Service Staff Association embarked on a similar action to protest poor conditions of service.

Charles Ofori believes their condition is worse. According to him, only two years ago the number of lawyers at the AGs office was 200 but because of the poor conditions of service a good number of them have moved to the bench where the conditions are relatively better.

He dismissed claims that the strike is illegal. "We are lawyers we have followed all processes. This our strike is legal," he said.

The implications of the strike Myjoyonline.com has learnt will be dire. The state's cases can partially grind to a halt. The criminal cases where the AG is expected to defend bail applications will also not be heard.