Statement from DFP members who have defected to the PPP - MyJoyOnline.com

Statement from DFP members who have defected to the PPP 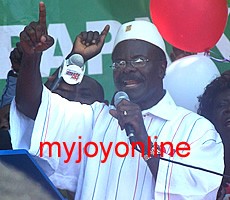 Good Morning ladies and gentlemen of the Media,

We are happy that you could find time to accept our invitation to be with us here today. We are very thankful to you for your coming. Today marks a very important day in the history of the Ghana politics.

The Democratic Freedom Party (DFP) was launched in early 2007 as a third force party led by Dr. Yao Obed Asamoah with its ideology and philosophy to facilitate the development of Ghana. With this, numerous Ghanaians decided to throw their weight behind the party to campaign massively to attain the presidential seat as well as some parliamentary seats.

The regional and constituency executives all over the country worked tirelessly toward the votes realized by the party during the 2008 general election of which some of us have been betrayed and marginalized by some authoritarian and greedy politicians.

In the light of this, some functional regional and constituency executives of the Democratic Freedom Party (DFP) comprising seven regions (i.e.
Ashanti, Brong Ahafo, Upper West, North, Eastern, Volta and Greater Accra) hereby dissociate ourselves from the decision taken by the life patron of the party Dr. Yao Obed Asamoah and a few members.

We want to state categorically that, there was no consensus before the so call merger with the ruling National Democratic Congress (NDC) by the life patron and a few members which we are totally not in support.

Today, the majority of the DFP supporters across the country have given us the mandate to announce to the Ghanaian populace and the NDC as a party to know that we still hold our earlier publications that we are not in support of the merger.

Ladies and gentlemen of the media, at this juncture, we the coalition of the seven functional regional and constituency executives of the DFP hereby declare to the entire nation that hence we form a group called “CAMPAIGN FOR EFFECTIVE LEADERSHIP”.

THAT CAMPAIGN FOR EFFECTIVE LEADERSHIP” stands for a leader who can

1. Create a just and discipline society
2. Improve the performance of Government
3. Give power to the people for development
4. Strengthen parliament to perform its legislative duties effectively
5. Provide quality education for every Ghanaian child
6. Provide energy for industrialization and rapid development
7. Provide better healthcare and cleaner environment.
8. Combat crime, the drug trade and corruption
9. Support Ghanaian in Diaspora to invest and re-establish residence back home.
10. To create jobs

Having assessed both past and present governments since 1992 up to date, the NDC government especially lacks the implementation of these ambitions.

We, the newly formed CAMPAIGN FOR EFFECTIVE LEADERSHIP members believe that these qualities can only be found in one person who has distinguished himself to all Ghanaians as a leader.

Former president John Agyekum Kufuor when announced his nomination to a lot of portfolios nomination sparked unprecedented nationwide interest in him. Parliament conducted extensive examination into the background and activities of him. His performance during the nationally televised parliamentary vetting meetings endeared him to Ghanaians and made him one of the most recognized and popular incoming President. Many appreciated the fact that he had made a sacrifice by leaving a job with the international prestige to join government.

His participation in the Kufuor administration made the government “all inclusive” as promised by the former president. History was made and it was significant that he, a leading member of the then Convention People’s party ( CPP) could serve the nation very well in an NPP led administration. The MCA grant of $547 million, National Identification System, Single Spine Salary Scheme to name a few were tangible benefits he as part of a team led to bring to Ghanaians.

He is no other person than DR.PAPA KWESI NDUOM (EDWUMAWURA)
We, the DFP majority from the seven regions and its respective constituencies (Newly campaign for effective leadership members), declare our support and follow Dr. Papa Kwasi Nduom to form his new PROGRESSIVE PEOPLE’S PARTY (PPP) our quest is to build a formidable political party as a credible alternative to the N.D.C and the N.P.P.

We therefore, want to take this opportunity to inform the entire nation to also look at the works, experiences and leadership skills of Edwumawura and vote him as the president of Ghana for 2012 general election in order to wrestle power from the National Democratic Congress (NDC).