STC plays down threats to auction its assets 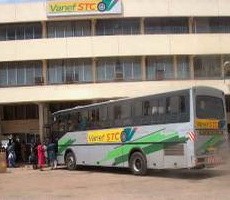 Pioneer long distance bus Intercity STC is confident threats of an intended auction of its assets will not come off.

Some assets of the company are up for sale by the Prudential Bank for failing to pay off loans it took to revamp its fleet of buses in 2005.

But STC says it is in talks with the bank as well as government officials and SNNIT, which has shares in both companies, to renegotiate the terms of payment.

Intercity STC’s Communications Manager Cyrus deGraft Johnson says the posting of auction notices on the company’s premises is only a matter of procedure.

“The auction will actually not take place, it is just a normal procedure that they are following through based on the fact that they have secured court judgement.”

The Social Security and National Insurance Trust, SSNIT which holds majority shares – 80% – in STC has confirmed the discussions.

Corporate Affairs Manager at SSNIT Eva Amegashie tells Joy News it will do its best to avert the auction.