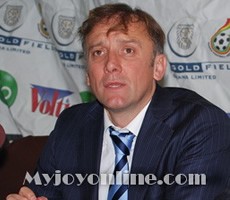 Coach Goran Stevanovic is relishing the task of leading Ghana’s quest for a fifth Africa Cup of Nations title in Equatorial Guinea and Gabon.

The Serbian is hoping to guide the Black Stars to Nations Cup glory for the first time since 1982.

“A lot of people ask me why I talk so much about the trophy,” he said. “For me, it’s not pressure.”

“It’s just a challenge because if you have a lot of confidence you need to let people know.”

“It is a challenge to be able to compete and win trophy – that is not pressure. I understand pressure the other way – if you don’t have quality and want to be champions, that is pressure.

“But if you have quality and want to be champions, that is a challenge.”

Ghana are the second favourites for the tournament behind Ivory Coast according to bookmakers, with the Elephants also higher in Fifa’s rankings.

However, many expect the Black Stars to lift the trophy given their run to the World Cup quarter-finals in South Africa two years ago.

The Ghanaians open their Group D campaign against debutants Botswana on 24 January in Franceville, where they then play Mali (28 January) and Guinea (01 February).

Stevanovic insists the Black Stars will not underestimate any opponent but is clear in his mind who represent the biggest threat to Ghana’s chances of winning the trophy.

“Senegal and Ivory Coast are our biggest opponents but in a tournament everybody can surprise,” said the former Partizan Belgrade boss.

“I think we are professional and serious enough to take every game with 100% commitment.”

With thirty years since the last success, there is now a national obsession in Ghana to win the title again after finishing as a semi-finalist in 2008 before then losing the 2010 final.

The Black Stars squad is a mix of experienced Nations Cup campaigners and exciting youngsters like Andre ‘Dede’ Ayew, Samuel Inkoom and Emmanuel Agyemang Badu, all of whom played at a major finals in 2010 Nations Cup.

“At this moment, we have enough experienced players and enough young players with some tournaments behind them,” said Stevanovic.

“I think we have a good mix between the old and young players with good experience and this is our big quality.

“We have one good year behind us, terrific qualifiers when we won all our games, very good friendly games and all of this gives me reason to think we have a chance to win trophies.”

“Every day I believe more in that because the players are fantastic professionals.

“Their commitment and approach to the training sessions are fantastic and I speak with them every day and give them confidence.

“I am sure that after the first game Ghana will show the people of the world that we are really, really favourites for this tournament.”