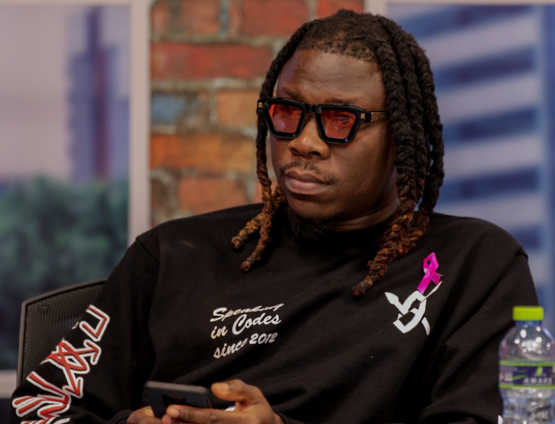 Speaking on GTV’s Breakfast Show, Stonebwoy said as an underground artiste, his mum supported his music with whatever money she had despite not knowing much about the industry.

He explained that “she was everything to my career. My Mum wouldn’t understand what it was, but, she would sell something to give you money…If I ever made it in life, it is because of my mother. I just hate that she is not here to see, that is what I feel sad about.”

Recalling his mother’s impact on his life, Stonebwoy said she was supportive and took care of him in his weakest moments.

“When my knee got messed up, I was in the hospital for six months and my mum was always there. She slept on the floor for three months. That is why I go after anyone who says anything about my mother, because you people don’t know what she has done for me.”

Stonebwoy’s mother, Mrs. Catherine Satekla, died on Wednesday, July 29, 2015, at the 37 Military Hospital where she was receiving treatment after collapsing the previous Sunday.

The ‘Everlasting’ hitmaker revealed his mother’s death is an incident he cannot get over, no matter how many years it has been.

The ‘Putuu’ singer said he is determined to continue making his mum proud.

“I won the BET in America, I called her and we were jumping about and I came back to meet her dead body. I still can’t get over that. I know she’s proud of me and I am going to do everything I can to make sure she is still happy about it.”

DISCLAIMER: The Views, Comments, Opinions, Contributions and Statements made by Readers and Contributors on this platform do not necessarily represent the views or policy of Multimedia Group Limited.
Tags:
Catherine Satekla
Stonebwoy