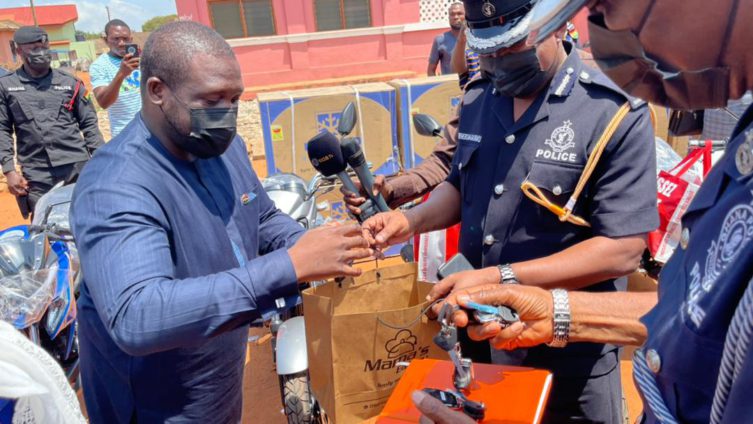 The Tema Regional Police Commander, DCOP Barima Tweneboah Sasraku II has admonished politicians in the country to desist from pleading for suspects arrested for various offences.

According to him, the Ningo-Prampram MP, Samuel Nartey George unlike his peers has never impressed on the police to release from custody those found culpable of crimes in his area.

DCOP Tweneboah Sasraku II made this known after the MP donated motorcycles valued at GHC40,000 to the Tema Regional Command Police to assist them to fight crime in the Ningo-Prampram area.

The Ningo Prampram area, arguably one of the fastest-growing areas in the country has recorded an increase in criminal activities over the last few years.

Criminal elements take advantage of the deplorable road network in the area to embark on their nefarious activities, prompting the Police Command to appeal to the MP to provide them with motorbikes since the bad road network makes it difficult for them to effectively combat crime.

Speaking during the handing over of the motorbikes on Monday, October 25, 2020, DCOP Barima Tweneboah Sasraku II, who was full of praise for the gesture by Mr George decried the practice where politicians and opinion leaders plead for suspects.

According to him, that practice affects effective policing.

He also used the opportunity to assure the MP that the items will be put to good use to ensure security.