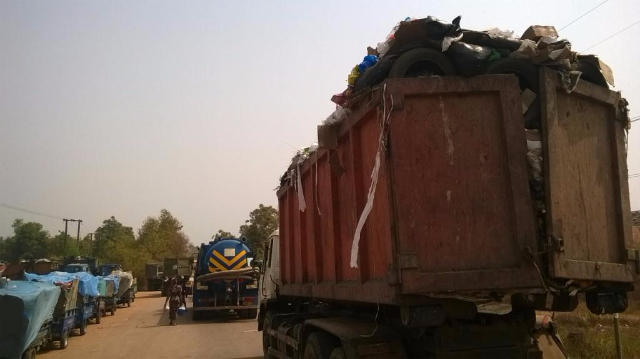 Nearly 200 refuse trucks have been stranded at the Dompoase Landfill Site in Kumasi as workers lock up the facility in a strike over unpaid salaries.

They say their salaries have been outstanding for up to seven months.

Clad in red arm and headbands, the workers who receive waste and ensure they are properly disposed off at the site, say they won’t work.

According to them, their employers have been changing payment dates frustrating them in the process especially at a time where the festive season is at the corner.

Amidst chants of “no money no work” some of them told LUV NEWS they will go back to work only when they receive their cash.

“Until they pay us we will not work. They should pay us in cash, not cheque or through the Bank. They promised to pay us on 15th [December] but it was later extended to 22nd but they have refused to honour their promise,” one aggrieved workers said.

“They should honor their promise before the Christmas,” he said.

Some of the refuse truck drivers who had been at the entrance of the landfill site as early as 5 a.m. looked frustrated, hoping the strikers could soften their stance.

“This is not the first time they are locking down the place. We sometimes come here early morning and wait till midday before we are allowed entry to place. We are all ready to work but they are not creating the necessary environment for us,” one of the drivers said.

The direct victims of the stand-off are residents of Atonsu-Kuwait-Dompoase where the landfill site is located.

They are subjected to worsening stench which they have endured for years despite attempts by authorities to control the effect.

Felix Oppong Boateng is one of the residents. He attributes his daughter’s sickness to the poor environment caused by the landfill site.

“The air is so polluted now, we can’t even breathe. I have had to rush my daughter to the hospital because of this,” he explained.

Officials however maintain it is no justification for anyone to shut down the facility.

Public Relations Officer, Godwin Okumah- Nyame, says talks are in progress to get the contractor to open the landfill site to refuse trucks.