Strong and Sassy to introduce 'My Story' series this May - MyJoyOnline.com

Strong and Sassy to introduce ‘My Story’ series this May 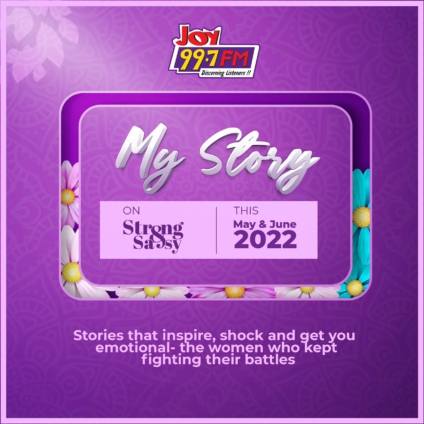 Strong and Sassy, Joy FM’s all-female talk show that takes the issues of women at heart is set to take a new twist this May.

Set to premiere May 11, the show will introduce a new series dubbed ‘My Story,’ which will take a dive into the lives of amazing women who have stood at the war front to fight amazing battles, have emerged victorious, and have success stories to tell from their encounters.

The series will run for a period of two months – from May to June.

The ‘My Story’ series is to champion unique stories from Ghanaian women who will tell stories that will inspire, educate, shock, break, build and also get you emotional.

These are stories that border on the career, lives, relationships, and even the health of women who will be featured; stories of death, unexpected pregnancies, suicides, abusive marriages or relationships, becoming pastors, stillbirths, cancer treatments, etc.

It will begin with the story of Edem, a strong-willed woman who found herself in an abusive relationship, and how her zeal to have her freedom led to losing all she had. Edem will be chronicling these events in her life and how she fought and overcame the situation.

In the second episode of the series, which will come off on May 18, also, Dorcas will be telling her story of how she survived even after undergoing various surgeries. She’s had surgeries- 7 of them to save her life. From breast Lump to Fibroid, Dorcas, who is a teacher, has an amazing story to tell about how she survived all these surgeries.

On May 25, the third edition of ‘My story’ will feature Gloria, a mother who lost her child to cancer. The backstory to what led to the death of her child is one that will always bring chills and tears to anyone who listens to the story. The helpless mother will narrate how she had to look on for her child to die from the disease because she couldn’t do anything to save her life.

In June, Rev Donkor, a woman, who had been in an abusive relationship for six years from her lover – after living on the streets of Tema, upon fleeing from an uncle who tried to sexually assault her, will also be sharing her story about how her life transformed. The lady Rev will detail the events from the days when she lived with her Uncle to when she moved in to stay with her abusive partner and how she ended up as a minister of God and a business owner.

On June 8, the host of Strong and Sassy will investigate Ethel who has an amazing background story to how she decided to be a boy’s doctor for young boys.

On June 15, we’ll hear the story of Aunty Mary who has some shocking suicide stories about herself and her children- with toughness and life struggles- she worked herself through hardship to get to where she is now- what could make a woman commit suicide?

‘My story’ will bring these stories that inspire, thrill and shock you.