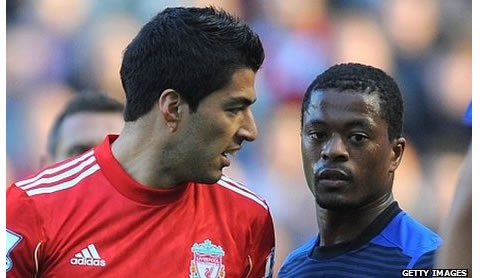 The Uruguayan reignited his simmering feud with United yesterday by sensationally claiming that they dominate the English game to such an extent that others are afraid to speak out against them.

Liverpool striker Suarez says United’s “political power” was the reason he was vilified in the Patrice Evra race row.

That came soon after the Uruguayan’s eight-game ban for using racially offensive words towards the defender.

Suarez said: “Before the match against Man United, I promised my wife, the manager and the directors I was going to shake my hand with Evra.

“It was only a handshake and I was OK with that.

“But it was a misunderstanding, what happened between me and Evra at Old Trafford. In fact, I think it was all arranged against me again, as it had happened with the punishment.

“The media in England showed the moment when I passed in front of him, but they didn’t see that he had his hand low before.

“Only the media in Uruguay and Spain showed I wanted to shake his hand. But in England, Man United has this ­political power and you have to respect that and shut your mouth.”

Suarez also hinted that people at Liverpool told him that United were out to stop him playing and revealed during the trial he was brought to tears.

He added: “I don’t show my emotions in the field, but outside I do. ­I cried a lot with all the Evra stuff.

“People at the club are sure that it was a way that Man United used to put me out of the team and stop Liverpool.

“I had to go to Manc­hester in a taxi for the ­trial. I got up at seven in the morning and I came home at nine at night.

“I was exhausted, I was so tired. I wanted to cry and kick all the things around me.”