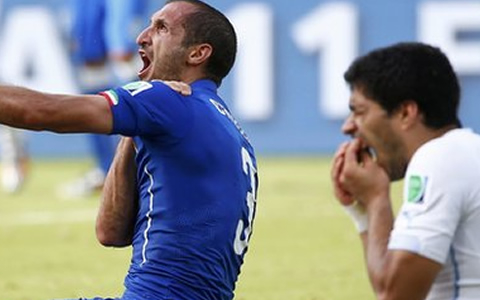 Barcelona striker Luis Suarez has failed in his appeal to have a four-month playing ban overturned but the Court of Arbitration for Sport has cleared him to train with his new club.

The Uruguay international was suspended from all football-related activity for biting Italy defender Giorgio Chiellini at the World Cup, with the punishment also including a nine-match suspension from internationals and a hefty fine.

Suarez, the Uruguayan federation and Barcelona – who spent £75million to sign the striker from Liverpool after he was sent home from Brazil in disgrace – appealed to CAS and the club, at least, have had a degree of success.

Barcelona's priority was to have Suarez available to work with the team, important in pre-season but essential when he is a new player, and CAS has relented on that issue.

"The CAS Panel has partially upheld the appeal. The sanctions imposed on the player by FIFA have been generally confirmed," said a statement.

"However, the four-month suspension will apply to official matches only and no longer to other football-related activities (such as training, promotional activities and administrative matters)."

The CAS Panel found that the sanctions imposed on the player were generally proportionate to the offence committed.

"It has however considered that the stadium ban and the ban from 'any football-related activity' were excessive given that such measures are not appropriate to sanction the offence committed by the player and would still have an impact on his activity after the end of the suspension."

"Luis Suarez is found guilty of violation of the FIFA Disciplinary Code for having committed an act of assault during the match between Italy and Uruguay played on June 24 2014 at the 2014 FIFA World Cup Brazil," added the statement.

"Luis Suarez is banned for nine consecutive official matches of the national team of the Uruguay.

"Luis Suarez is declared ineligible to play in official matches at any level for a period of four consecutive months, starting on June 25 2014 and is sanctioned to pay a fine in the amount 100,000 Swiss francs (£66,255)."

It is the third time Suarez had been found guilty of biting an opponent in his career.

While he was at Ajax, Suarez bit PSV Eindhoven's Otman Bakkal in November 2010, and while at Liverpool he bit Chelsea defender Branislav Ivanovic in April 2013.