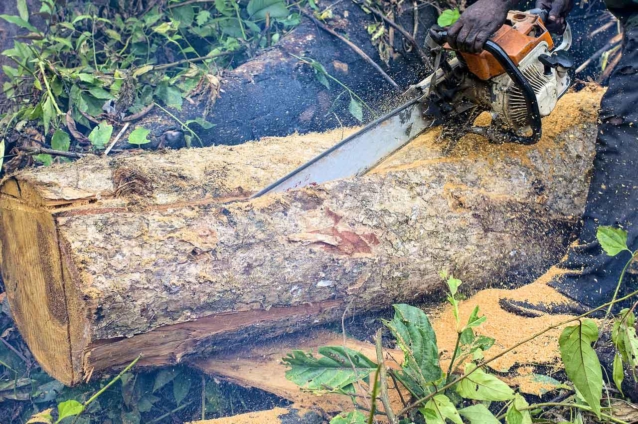 The 2020 Sunyani Municipal Best Farmer, Kwaku Takyi, has expressed displeasure about uncontrolled illegal chainsaw operations at Daadom, a farming community in the Sunyani Municipality of the Bono region.

The practice, he stated is gravely affecting their farm work and further paving way for climate change to devastate farms in the area.

Mr Takyi, who is also the Chief Farmer of Daadom said climate change has affected the volume of food production in the area, hence the urgent need for the implementation of climate change adaptation education programmes.

“The effect of climate change is well felt in my area, affecting food production and farming activities due to unpredictable rainfall and weather patterns which is partly caused by the activities of the illegal chainsaw operators,” he stressed.

The 2020 Sunyani Municipal Best Farmer appealed for implementation of climate change mitigation measures to reverse the trend as well as the institution of a forestry taskforce that could check the illegal chainsaw operators.

Mr Takyi indicated that lack of access to farm lands remains a huge challenge in the area, indicating that “if the farm lands are readily accessibility, many farmers here are ready to expand their farming activities to improve food production”.

He therefore called on the department of agriculture to collaborate with traditional authorities in the Bono region to release farm lands to enable many farmers in the region engage in commercial farming to enhance food production and security.

Mr Takyi commended government for initiating the Planting for Food and Jobs (PFJ) programme because it has helped many farmers to expand their farms.

He, however, noted the government’s distribution of agro-chemicals to the farmers in the area, under the PFJ is inadequate.