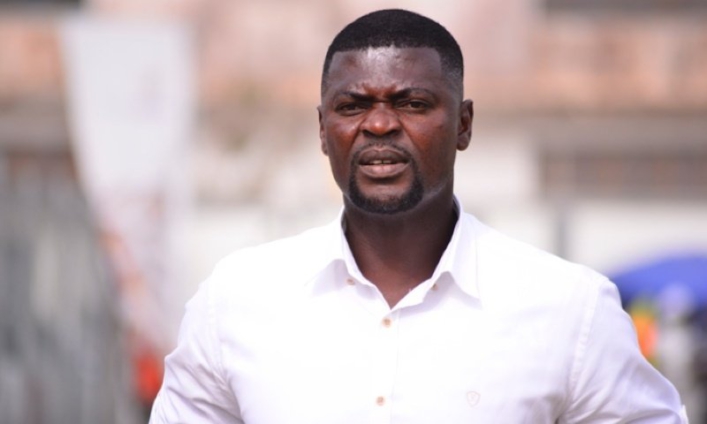 Two FA Cup titles and one Premier League title in two-and-a-half-years, do not seem capable of preserving the future of Samuel Boadu, who is having a growing blurry vision of his future at Hearts of Oak.

The Phobians are yet to win a game this season – after finishing 6th in the 2021/22 campaign, and even Hearts’ track record of naturally enduring poor starts to a league season cannot win Boadu an argument for this one.

After clinching a late equaliser at the Accra Sports stadium versus city rivals, Accra Great Olympics, fans of the Rainbow club were expectant of victory at Baba Yara – home to old-time rivals, Asante Kotoko, who were still licking the wounds of a humbling CAF Champions League experience by RC Kadiogo.

But in a Super Clash which came relatively earlier than usual, Hearts went behind after midpoint through the second-half – Richmond Ayi doing little to justify starting over Richard Attah, with Mubarik Yussif slotting home Ayi’s spilled attempt of making a save.

Hearts seemed destined of making another early season appearance in the bottom three of the league table, till Caleb Amankwah struck hot three minutes from time and rescued them a point. Boadu celebrated the equaliser in trademark fashion, and greeted the full-time whistle with the trademark celebration again. He went on to suggest in his post-match interview, Kotoko were lucky to even get a point.

“We [Hearts] wanted to outplay Kotoko because I know we are far better than them, but Awako’s early knock thwarted our plans. But for Kotoko to beat us? I asked my players to keep their composure because we will come back. It’s quite unfortunate we drew with them.”

He oozed confidence while talking to the game’s broadcasters, but for fans at home who viewed the broadcast, it was Hearts who were lucky not to leave empty-handed, as one told JoySports.

Well at least, this gentleman in particular seems willing to give Boadu some more time in charge of Hearts, but there are many who will have pulled the trigger had they been board members. And now, they have given the board an ultimatum to send the former Medeama boss packing.

“But if we are winning the league, Samuel Boadu can never take us to the glory land. So they [Hearts board] should just make a decision from today [Sunday] to Monday – there should be a decision that will profit Hearts of Oak, and that will be the only ecstasy most Hearts fans are going to enjoy. Samuel Boadu is the problem.”

“I’m begging you in the name of God, tell the management of Hearts of Oak to sack that coach. My brother if not, we will move to the training grounds one day and take him out of the place.”

From having his wedding televised live by national broadcasters, to becoming the most wanted man at Hearts, Boadu is experiencing the cold duality of life.

After a season which saw him end the Phobian’s painful 12-year wait for the Premier League title, and also winning the FA Cup and Super Cup in theory, Boadu saw his stock rise with Ghana’s oldest club.

In reality, he also returned the club to Africa’s biggest club competition – the CAF Champions League, and realistically, few expected an inexperienced manager armed with an inexperienced young team to make any real impact on the stage. But rather unfortunate for Boadu, Boadu and Hearts of Oak earned a 1-0 home win over JS Saoura. (Ironical right?)

Going away to the North of Africa, everyone admitted the task of qualifying ahead of the North Africans was a tough ask. Almost more than majority of fans and pundits expected a defeat and it eventually came, and did so in embarrassing fashion.

A heavy defeat to Wydad Athletic Club was almost immediately followed by a second-leg humbling to JS Saoura, after Hearts had taken first-leg glory again.

Those two games undoubtedly raised the first question over Boadu’s future, and they first arose at the highest of places.

“I have serious concerns about the technical team’s ability to be successful in Africa. A major club like Hearts of Oak has to be led by a big coach like Attuquayefio all the time in order to be successful. I feel that the existing technical staff won’t be able to lead us very far,” board member, Dr. Nyaho-Tamakloe told Angel FM.

What is more critical though is Boadu’s open falling out with the vocal board member, who had many good things to say about him when he first joined the Phobians.

“This case [Samuel Boadu moving to Hearts] is quite an interesting case. We didn’t really see him as a special figure per se. I remember I had a talk with him and during our discussions, I was convinced that this is somebody who knows exactly what he’s about and he can work.

“When he came, what I noticed was that this is a disciplined guy who knows exactly what he’s about. So we gave him that chance and opportunity and he’s proven himself right. He listens,” Dr. Tamakloe initially said of Boadu, and despite him falling out of favour with the former GFA boss, Boadu rode the storm and saw out the season with fans of the club on his side.

But after falling 19 points adrift Kotoko and finishing sixth on the Premier League table, the same fans who were at the battle front for Boadu, now want his blood.

DISCLAIMER: The Views, Comments, Opinions, Contributions and Statements made by Readers and Contributors on this platform do not necessarily represent the views or policy of Multimedia Group Limited.
Tags:
Hearts of Oak
Mishael Quaynor
Samuel Boadu
Super Clash