Supreme and Dr Martens have resurrected their partnership 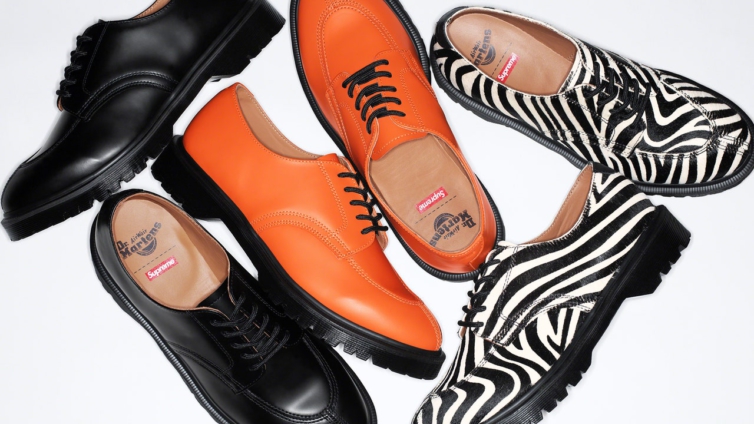 We might not even be a full third of the way through 2021, yet Wollaston-based footwear and accessories label Dr Martens has already had more collaborative wins than the entire span of last year.

So far, the British brand that is best known for its oil-resistant rubber soles has partnered with Rick Owens on a range of lace-heavy Bex platform-sole boots, Japanese brand Undercover to deliver a range of corduroy 1460 8-Eye boots, and Tyler, The Creator-approved Suicoke on strappy, ribbed sandals.

Elsewhere it has also worked with Yohji Yamamoto, the estate of Keith Haring, Lazy Oaf and even Hello Kitty.

Now, Dr Martens has turned its attention to the big guns of the streetwear industry, Supreme, the skate-infused brand which was founded by James Jebbia in 1994 and was bought by VF Corp in 2020 for a cool £1.6 billion.

This isn’t the first time Supreme and Dr Martens have worked together. Back in 2017, the two dropped a custom version of the latter’s three-eye Smith shoe, which featured an embroidered sacred heart, while in 2018 the duo hooked up with Undercover to deliver codesigned 1461 shoes that featured artwork from Public Enemy’s 1990 album, Fear Of A Black Planet. After a short hiatus, the partnership is back up and running.

For Spring/Summer 2021 the pair have focused on Dr Martens’ 5-Eye shoe. Traditionally characterised by a treaded outsole, DM’s AirWair cushioning in the sole and, as the name suggests, five eyelets, the Supreme 5-Eye shoes come in a new range of punchy colours and patterns.

There’s a fruity satsuma-hued pair up for grabs, while an all-over zebra-print version stays true to Supreme’s ongoing obsession with animal prints (check out its recent snakeskin-embossed Nike Air Max Goadome boot-shoe hybrid). Meanwhile, for the less sartorially daring among us, there’s a pair of sleek, all-black Derby shoes.

Available from Thursday 8 April at 11am, these will add a spring to your step this April (should you beat the Supreme drop system).

DISCLAIMER: The Views, Comments, Opinions, Contributions and Statements made by Readers and Contributors on this platform do not necessarily represent the views or policy of Multimedia Group Limited.
Tags:
Collaboration
Dr Martens
Supreme