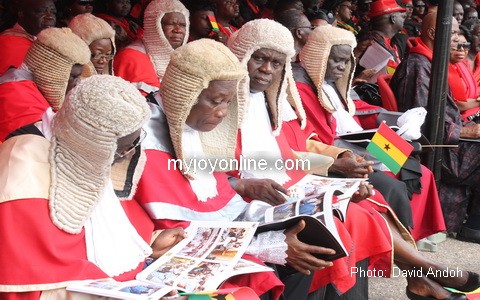 A journalist, Richard Sky and a private legal practitioner, Kwesi Danso Acheampong are seeking an interpretation of article 70(2), which relates to the appointment of the EC Chairman.

“ The President shall, acting on the advice of the Council of State, appoint the Chairman, Deputy Chairmen, and other members of the Electoral Commission,” the Article 70 (2) read in part.

On the other hand, the Ghana Bar Association and three other top members of the bar filed a suit at the Supreme Court seeking interpretation of Article 114 clauses (2) and (3) relating to the appointment of justices to the Supreme Court and Court of Appeal.

“2) The other Supreme Court Justices shall be appointed by the President acting on the advice of the Judicial Council, in consultation with the Council of State and with the approval of Parliament.

“(3) Justices of the Court of Appeal and of the High Court and Chairmen of Regional Tribunals shall be appointed by the President acting on the advice of the judicial Council.”

However, the Supreme Court panel presided over by the Chief Justice, Georgina Theodora Wood, indicated to the two lawyers seeking interpretation on the president's appointment –  Alex Afenyo Markin and Kwesi Danso Acheampong – would have to present their cases as one to save time and cost.

“For the purpose of judicial economy, the court has directed that we consolidate the writs before the Court…basically it will help determine matters once and for all. We think we are in agreement,” Alexander Afenyo-Markins explained to Joy News.

That position was also accepted by Kwesi Danso Acheampong.

However, he is considering filing a contempt charge against the Attorney General because the President’s appointment of the EC boss disregarded the matter pending before the Supreme Court.