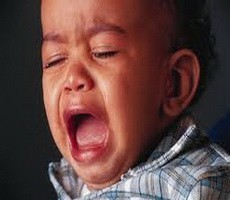 One-year-old babies who sweat more when faced with scary situations show less aggression when aged three, according to research from Cardiff University.

A sweat monitor was placed next to babies’ feet measuring their reaction to loud noise and a mechanical robot.

Two years later, data was collected from their mothers on the children’s aggressive behaviour.

Babies with a strong physical reaction to fear and anger were less physically and verbally aggressive as toddlers.

Sweat levels are monitored by skin conductance activity (SCA), how the body physically reacts when aroused by fear or anger.

Children that have “a weaker fear response” are “more likely to engage in antisocial behaviour”, said Professor Stefanie van Goozen from Cardiff University’s school of psychology, who led the study.

“Low arousal levels are linked to aggression. You need to feel your arousal in order to warn you that you are in an emotional situation.

“If you don’t feel that in your body then the braking system doesn’t kick in.

“If you jump out of a plane you feel your heart beating – if you don’t feel this then you don’t learn.

“This feeling is linked to your development. If you don’t feel, you don’t bring out the fear.

“We need these signals. We need the anticipation of the negative thing.

“We are more prone to developing in an aggressive way if we don’t feel the punishing consequences of our behaviour.”

Rose Hunt, a 21-year-old mother from Pontyclun, said that her baby Harrison, who is nearly one, has a high skin reaction in emotional situations.

She said: “I don’t wrap him up as much as other babies when we go out because he can get quite sweaty – mainly on his head, but also on his arms and his back.

“He sweats a lot more when he gets wound up.”

Miss Hunt said that if there is a link between sweat and non-aggression then Harrison will be “the most laid back toddler there is”.

Prof van Goozen said that they didn’t know why some babies had a strong physical reaction in the study and some did not, but it suggested that aggression in toddlers might be genetic.

“It didn’t surprise me,” she said.

“We always look at the parents, or poor environments for why a child is difficult. It is possible to have toddlers that are clinically more difficult.”

A previous study where skin activity was measured in toddlers to predict their aggression as adolescents showed similar results. The more the skin reacted to fear and anger, the less aggressive the adolescent.

Criminology expert Prof Adrian Raine from the University of Pennsylvania said: “If these new results can be replicated and extended to other ages, they have potentially important implications for the future prediction of aggressive and violent behaviour.”