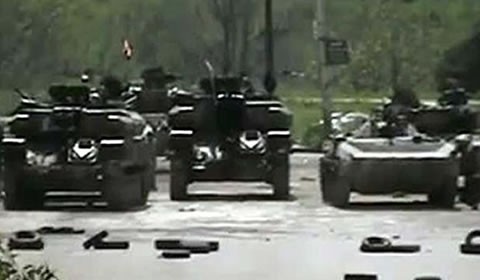 Amnesty International has condemned what appears to be a summary execution of Syrian government soldiers by rebel fighters in a video posted online.

The human rights group said that the killings on Thursday – if confirmed – constituted a “war crime”.

The alleged executions took place after the rebels overran army checkpoints between Damascus and Aleppo.

The army, meanwhile, continued its air strikes across Syria. In all, more than 150 people reportedly died in fighting.

The Syrian Observatory for Human Rights (SOHR) said more than 70 government soldiers, 43 civilians and 38 rebels were killed in Thursday’s fighting.

The UK-based activist group said more than 36,000 people have been killed since protests against President Bashar al-Assad erupted in March 2011.

The SOHR is one of the most prominent organisations documenting and reporting incidents and casualties in the Syrian conflict. It says its reports are impartial, though its information cannot be independently verified.

The video allegedly shows rebel fighters kicking and pushing about a dozen soldiers to the ground inside what appears to be a seized checkpoint.

A volley of shots is then fired into the cowering mass of bodies.

In a statement, Amnesty said: “This shocking footage depicts a potential war crime in progress, and demonstrates an utter disregard for international humanitarian law by the armed group in question.”

No group has so far admitted carrying out the alleged killings.

But it is alleged that an extremist Islamist group, the al-Nusra front, was responsible, the BBC’s Jim Muir in neighbouring Lebanon reports.

But there has been mounting evidence of similar tactics being used by some rebel groups too, although many have signed a code of practice banning such abuses, our correspondent says.

US Secretary of State Hillary Clinton earlier warned that radical Islamist fighters were trying to hijack the Syrian revolution.

The comments have drawn an angry response from some opposition leaders, who say that it is the failure of the outside world to support the uprising with practical help that has left the field open to the radicals.