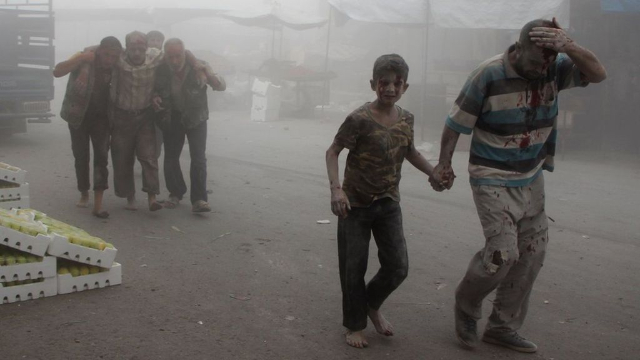 A cessation of hostilities has come into effect in Syria, following a weekend of air strikes.

If the truce holds for seven days, the US and Russia will carry out co-ordinated air strikes against jihadist militants.

Syrian state media said President Bashar al-Assad had welcomed the deal, struck on Friday in Geneva after months of talks between Russia and the US.

But it is unclear whether rebel factions will abide by it.

The cessation of violence officially came into effect at sunset on Monday.

Earlier, the Free Syrian Army group wrote to the US administration saying that while it would "co-operate positively" with the ceasefire, it was concerned it would benefit the government.

Another major rebel group, the hardline Islamist Ahrar al-Sham, initially rejected the deal later it appeared to have softened its stance.

Opposition sources quoted by Reuters said that a forthcoming statement supporting the cessation "with harsh reservations" would be backed by "the largest groups", including Ahrar al-Sham.

President Assad, speaking before the ceasefire was due to start, said the Syrian state was still "determined to recover every area from the terrorists, and to rebuild".

Even before the ceasefire came into effect there were signs of problems with the plan.

Armed opposition groups have formed alliances to fight the Syrian army. They range from groups supported by the Americans and their allies to ones that have had links with al-Qaeda.

The ceasefire calls on US backed groups to separate from the others. They're reluctant to do so – one saying they're in the same trench, with joint operations rooms.

That is just one part of a complicated agreement that might crack open when it comes up against the realities of the Syrian war.

Ahead of the ceasefire, the Syrian government carried out heavy air strikes in several rebel areas over the weekend, killing about 100 people.

Russian warplanes have also been in action in the provinces of Idlib and Aleppo, say Syrian activists.

Such intensification of violence has occurred before other, aborted, ceasefires in Syria.

"We hope there will be a ceasefire so that civilians can get a break. The shelling goes on night and day, there are targeted killings, besieged cities," said Abu Abdullah, who lives in Aleppo's rebel-held east.

"Civilians have no hope any more."

Russia and the US will then establish a joint centre to combat jihadist groups, including so-called Islamic State and Jabhat Fateh al-Sham (known until recently as the Nusra Front).

The conflict in Syria, which began with an uprising against Mr Assad, has raged for five years and claimed the lives of more than a quarter of a million people.

More than 4.8 million have fled abroad, and an estimated 6.5 million others have been displaced within the country, the UN says.