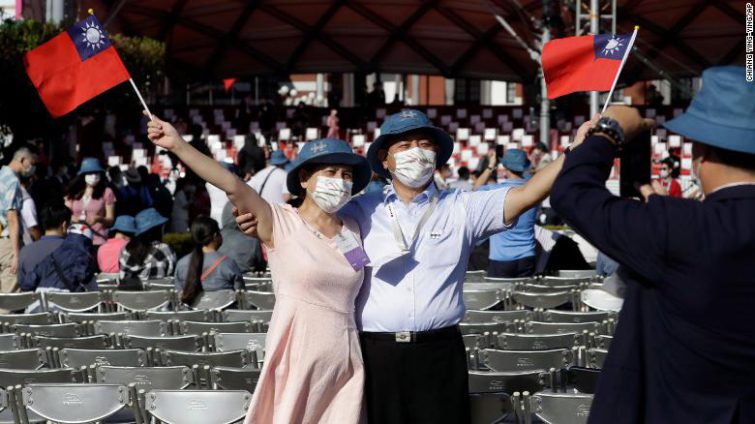 Taiwan will not bow to pressure and nobody can force it to accept the path China has laid out for the self-governing democracy, President Tsai Ing-wen said Sunday as the island celebrated its National Day amid heightened tensions with Beijing.

During her speech in front of the presidential office in the capital Taipei, Tsai warned that Taiwan is facing the “most complex situation” in the past 72 years, since the end of the Chinese civil war.

Her speech came days after China flew record numbers of warplanes into its defence zone in a significant escalation of military tensions. Chinese President Xi Jinping on Saturday vowed to pursue what Beijing called “reunification” with Taiwan by peaceful means.

“Those who forget their heritage, betray their motherland and seek to split the country will come to no good,” Xi said.

He also reiterated calls for Taipei to unify with Beijing under a “one country, two systems” model, similar to that used in Hong Kong — but generally opposed by Taiwan.

In response, Tsai said on Sunday that Taiwan hopes for “an easing of cross-strait relations” and will not “act rashly,” but stressed, “there should be absolutely no illusions that the Taiwanese people will bow to pressure.”

“We will continue to bolster our national defence and demonstrate our determination to defend ourselves in order to ensure that nobody can force Taiwan to take the path China has laid out for us,” she said at the National Day celebrations, which marked 110 years of a revolution that ended the last Chinese imperial dynasty.

“This is because the path that China has laid out offers neither a free and democratic way of life for Taiwan, nor sovereignty for our 23 million people.”

Taiwan and mainland China have been governed separately since the end of a civil war more than seven decades ago, in which the defeated Nationalists fled to Taipei.

However, Beijing views Taiwan as an inseparable part of its territory — even though the Chinese Communist Party has never governed the democratic island.

In her speech, Tsai presented Taiwan as being at the forefront of the battle between democracy and authoritarianism, echoing the theme of the celebrations this year — “a democratic alliance, making friends around the world.”

“At this moment free and democratic countries have been alerted to the expansion of authoritarianism, and Taiwan is on the forefront of the defence line of fellow democracies,” she said, following a morning of musical and dance performances.

The ceremony, held outside the presidential office in Taipei, was attended by hundreds of people, including members of the public and foreign guests — a smaller attendance than previous years due to Covid concerns.

On Sunday, major roads in the Taiwanese capital were lined with national flags. The celebration also saw the largest national flag ever made flown over the crowds by helicopter, as the national anthem was performed at the start of the ceremony.

As part of the celebrations, Taiwan’s Ministry of national defence said it would display four types of domestic missiles, include the Thunderbolt 2000 multiple rocket launcher, medium-range Sky Sword II and Sky Bow III, as well as cruise missiles Hsiung Feng II and III.

During the parade, however, the audience did not see the actual missiles when the military trucks drove past the stage.

Beijing has refused to rule out military force against Taiwan if necessary, and tensions have risen in recent weeks after the Chinese People’s Liberation Army sent the largest number of warplanes — including fighter jets and nuclear-capable bombers — into Taiwan’s Air Defense Identification Zone (ADIZ) last week.

The incursions did not violate Taiwan’s sovereign airspace, which extends 12 nautical miles from its coast.

The US Federal Aviation Administration defines an ADIZ as “a designated area of airspace” where a country “requires the immediate and positive identification, location and air traffic control” to protect its national security.Last weekend, the US State Department issued a statement that called on China “to cease its military, diplomatic, and economic pressure and coercion against Taiwan.”

“The United States is very concerned by the People’s Republic of China’s provocative military activity near Taiwan, which is destabilizing, risks miscalculations, and undermines regional peace and stability,” said US State Department spokesperson Ned Price. “The US commitment to Taiwan is rock solid and contributes to the maintenance of peace and stability across the Taiwan Strait and within the region.”

China’s Ministry of Foreign Affairs subsequently criticized the US for making “irresponsible remarks,” adding the US has “seriously undermined the One-China Principle.

“Despite the constant military threat, analysts pointed out that Taiwan has steadily expanded its international presence over the last few years. Last Thursday, Tsai welcomed former Australian prime minister Tony Abbott and a group of French senators in Taipei, as she vowed to deepen collaborations with “freedom-loving democracies” around the world.”It is a balancing act,” said J. Michael Cole, a Taipei-based senior fellow with Global Institute Taiwan. “

Taiwan has been in recent years seizing the opportunity to expand its international space … we have seen this with the United States in recent years, but more and more other democracies — large and small — are also willing to challenge what just a few years ago had been unbreachable red lines defined by Beijing.

“For example, Lithuania announced in July that it would allow Taipei to open a new representative office under the name “Taiwan” — despite having no formal diplomatic relations with the self-governing island. Beijing strongly opposed the move, and both China and Lithuania subsequently recalled their ambassadors amid worsening ties.

The military parade on Sunday is an unprecedented show of force to mark Taiwan’s National Day, with an aim to “show the national army’s determination, responsibilities and obligation in defending Taiwan,” the island’s ministry of national defense said in a statement.

Last Wednesday, Taiwan’s Defense Minister Chiu Kuo-cheng estimated that China could be capable of mounting a “full-scale” invasion by 2025.”With regards to staging an attack on Taiwan, they currently have the ability. But [China] has to pay the price,” he said, adding that the price will become lower in the next four years.

Chang Yan-ting, a former deputy commander of the Taiwanese air force, told CNN he believed the display of missiles were linked to a recent proposal to increase the island’s defense spending.

The defense ministry proposed last month an extra budget of US$8.7 billion over the next five years to upgrade weapons — including developing new missiles.

Chang said Sunday’s parade was likely targeted at the domestic audience to rally support for increased military spending, adding the development of long-range and mobile missiles would be an important part for Taiwan to boost its asymmetric warfare capabilities.

“The best weapon for elevating our precision-strike capabilities is by developing missiles,” he said, because they can be effective for targeting airports and ports if military conflict were to happen.

“We cannot control whether or not the Chinese Communist Party has the ability to attack Taiwan, but we are able to control and make sure it does not have the motivation to do so,” Chang added.

“We need to be able to defend against the first wave of attacks — whether it is for half a month, one month, or two months, then we can wait for assistance from the international world.”