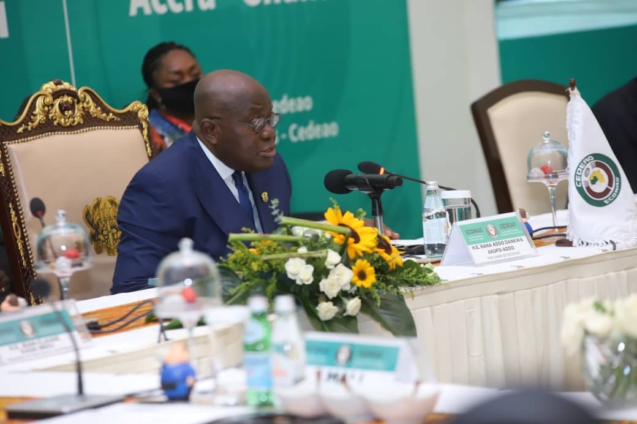 A legal practitioner in Nigeria has called on President Akufo-Addo and the leaders of ECOWAS to take preventive measures to stop coups and unconstitutional change of governments in the sub-region.

According to Femi Falana, it is unfortunate that rather than taking preventive measures to enforce respect for human rights, the rule of law, and end impunity of political leaders who frequently seek to change their national constitutions for personal gain, ECOWAS rather acts after a coup has occurred.

In a letter to President Akufo-Addo, who is the Chairman of ECOWAS, he noted that “unlawfully amending national constitutions to remain in office is acting above the law, and contrary to ECOWAS treaties and protocols, and other international standards, as well as seriously undermines member states’ democratic systems.”

“The persistent failure of the leadership of ECOWAS to take a preventive and active role in dealing with these threats to democracy, human rights and the rule of law has continued to contribute significantly to recurring coups and unconstitutional change of governments in many countries,” he added.

His comment comes at a time when the African continent within a year alone, has witnessed three coups and an attempted takeover.

Mali has witnessed two coups, Guinea’s administration was recently taken over by the military and there has been an attempted coup d’etat in Niger.

On Sunday, September 5, a Guinean military officer, Mamady Doumbouya announced that the country’s constitution has been revoked following a coup.

After seizing the airwaves, the mutinous soldiers vowed to restore democracy.

But Mr. Falana says it is unfortunate that ECOWAS has continued to tolerate these member states whose leaders, prior to their being ousted, showed no regard for democracy or rule of law and only reacted after the military rule is instituted.

He stated that in many of these states, elections conducted are neither fair, credible nor free and political opponents and activists who speak against those acts are jailed or murdered.

“Despite the illegality and grave human rights violations in many of these member states, ECOWAS has continued to send election observers to these countries who usually endorse questionable and seriously flawed elections under purported constitutional amendment,” Mr. Falana added.

The Legal practitioner recommended that the regional bloc asserts its mandates under its treaties and protocols to immediately push for full and effective respect for democratic principles, human rights, transparency and accountability, as well as the rule of law in each of its member states.

“ECOWAS should also make the meaningful and effective implementation of its treaties and protocols on democracy and human rights, and obeying the rule of law a condition for retaining the membership of the institution.”

Mr. Falana added that “to prevent members of the armed forces from hiding under the pretext of fighting insecurity to sack constitutional governments, the Multinational Joint Task Force (MNJTF), (a combined multinational formation, comprising units of the armed forces from Benin, Cameroon, Chad, Niger, and Nigeria) should be revived, expanded and funded to fight insurgency in the region.”

DISCLAIMER: The Views, Comments, Opinions, Contributions and Statements made by Readers and Contributors on this platform do not necessarily represent the views or policy of Multimedia Group Limited.
Tags:
Coup
ECOWAS
President Akufo-Addo