It is the biggest shock of the election so far which is the most competitive in the country's history.

The BBC's Muliro Telewa in the main city Dar es Salaam says the news will worry the governing CCM party that has been in power for 54 years.

The electoral commission has until Thursday to announce the final results.

Observers from the European Union have given a positive assessment of the polls.

But they raised several concerns – including the apparent failure of state media to give fair and equitable coverage to the opposition in the build-up to the election.

The opposition Ukawa coalition on the semi-autonomous archipelago of Zanzibar has expressed concerns about the results announced so far.

Residents on the islands also voted for their own president and members of the Zanzibar parliament on Sunday.

CUF, one of four parties which make up Ukawa, has accused the Zanzibar electoral commission of only releasing results from constituencies where the CMM candidate has won.

On Monday, Ukawa candidate Seif Sharif Hamad declared himself the winner of the Zanzibari presidential poll.

Correspondents say tension has been rising on the islands ahead of the final results, expected on Tuesday. 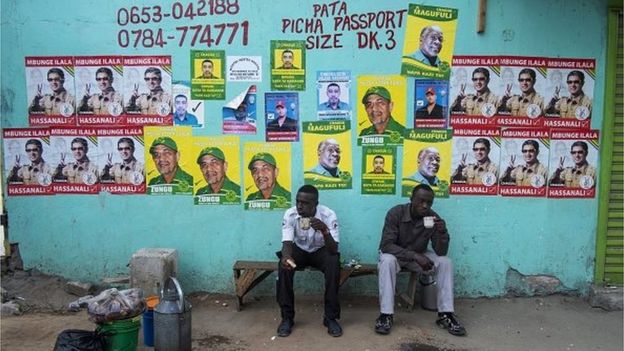 Previous elections have turned violent on Zanzibar, which is made up of the islands of Unguja and Pemba and is a popular with tourists.

President Jakaya Kikwete, who is standing down after two terms, called for peace before the election, saying "anyone who tries to cause trouble will be dealt with".