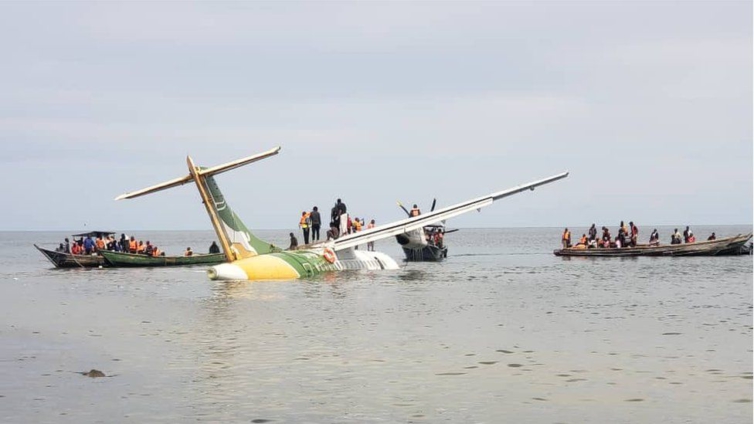 A Tanzanian passenger plane has crashed into Lake Victoria as it attempted to land in the lakeside town of Bukoba, killing at least 19 people.

Twenty-six of the 43 people on board the Precision Air flight were initially rescued and sent to hospital.

The two pilots survived the crash and managed to speak to local officials from the cockpit but the prime minister says they may have since died.

Rescue workers and local fishermen are trying to reach those still trapped.

Abdul Nuri was at the airport waiting for the return flight to Tanzania’s biggest city, Dar es Salaam, when he saw the plane plunge into the water.

“We were really shocked. People panicked and some started crying and shouting,” he told the BBC.

“At the arrivals gate people panicked as well – most of them were waiting to welcome their relatives.”

He has spoken to the fishermen who were first on the scene. They told him they managed to get into the plane to rescue people after a flight attendant opened the rear door after the plane had crashed.

The tragedy, which occurred around 08:30 local time (05:30 GMT), has been blamed on bad weather but the rain has stopped, allowing rescuers to reach the crash site.

Emergency workers have used ropes to pull the ATR-42 aircraft closer to the shore, and some of the plane’s body is now above the water.

Immediately after the crash, the plane was almost completely submerged with only the brown and green tail fin visible.

One end of the runway at Bukoba airport lies right next to the shore of Lake Victoria, Africa’s largest lake.

The airport has been closed until further notice.

Tanzania’s Prime Minister Kassim Majaliwa has gone to the scene and said an extensive investigation would be carried out to determine the full causes of the crash.

“We are still identifying the bodies, but it is highly likely that the pilots might have perished,” he said.

President Samia Suluhu Hassan has expressed her condolences to those affected and called for calm as the rescue operation continues.

The plane was flying from Das es Salaam to Bukoba via Mwanza.

Precision Air is Tanzania’s largest private airline and is partly owned by Kenya Airways. It was founded in 1993 and operates domestic and regional flights.

DISCLAIMER: The Views, Comments, Opinions, Contributions and Statements made by Readers and Contributors on this platform do not necessarily represent the views or policy of Multimedia Group Limited.
Tags:
Plane crash
Precision Air
Tanzania