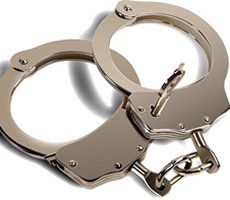 Two suspected armed robbers have been arrested by the Tema Regional Police Command for attempting to rob a passenger.

Eric Asante, a 23-year-old taxi driver, and Richard Osei, a 29-year-old businessman, were said to be on the Police wanted list.

The suspects and their victim are currently on admission at the Tema General Hospital after sustaining gunshot wounds.

ASP Obeng said, consequently, some drivers drew the attention of a police officer stationed at the Choice Commodities Limited, near the Tema Mall, to the taxi.

She said as the Police officer was monitoring the movement of the said taxi cab from his duty post, the victim came out of the Universal Merchant Bank after a transaction, and joined the taxi as a passenger.

The Police officer then joined another vehicle and followed the taxi, and upon reaching the GTP roundabout, the officer fired at the taxi cab to prevent it from moving.

According to the Police PRO, the taxi which was being driven by Asante sped off but was pursued and eventually apprehended by the Police Visibility Team stationed at the roundabout.

A search in the car after the arrest, revealed two locally manufactured pistols, some dried leaves suspected to be Indian hemp, a savings account book belonging to one Mary Abriefi and GH¢85.00

ASP Obeng stated that investigations were ongoing, after which the two suspects would be arraigned at the court.

She gave the assurance that the Command would intensify its patrols around banks and other public installations in the Region to ensure the safety of residents and their property.

She sounded a word of caution to criminals in the Region to desist from their activities as the Service would not relent in its efforts to apprehend and prosecute them.