Tennis: Williams shrugs off slow start to speed into third round 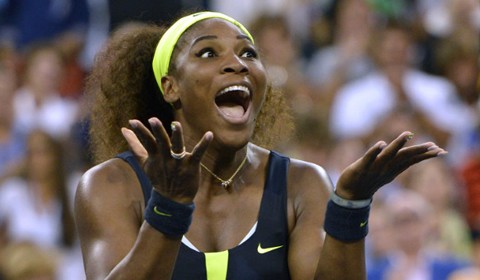 World number one Serena Williams overcame a wobbly start to open the defence of her Sony Open crown with a spirited 7-6(9-7) 6-2 win over Kazakhstan's Yaroslava Shvedova on Thursday (Friday, PHL time).

A six-time winner on the Miami hardcourts, Williams' second round meeting with the 59th-ranked Shvedova was expected to be little more than a tuneup for the 17-time grand slam winner but for a brief moment the match delivered some unexpected suspense.

"I was making a little more errors than what I should have been making, what I should've made, and that kind of threw me for a loop, as well.

"She was up a break (in the first set) and I started just really trying to fight to make the shots.

"And then when she was serving for the first set I really just tried to be more Serena like."

The contest began with Williams seizing control 3-1 but Shvedova had a sparse centre court crowd buzzing after breaking the American twice on the way to a 5-3 lead.

But with Shvedova serving for the match, Williams showed why she is the sport's dominant player breaking her opponent and forcing the opening set to a tiebreak.

In the tiebreak, Shvedova, who had never taken a set off Williams in three previous meetings, surged ahead 6-3 but then crumbled under the mounting pressure, double-faulting before the defending champion blasted a pair of aces past her.

Williams then clinched the set in emphatic fashion, a crushing forehand followed by an equally forceful fist-pump.

After trading breaks to open the second set, Shvedova would hold serve before a focused Williams moved in for the kill, sweeping the next five games to secure passage to the next round.

"It's definitely going to help, knowing that I was able to pull that through after being down pretty drastically," said Williams, will next face Frenchwoman Caroline Garcia who advanced to the third round with a 7-6 (7-3) 7-6 (7-3) upset of 27th seed Klara Zakopalova of the Czech Republic.

A five-time runnerup in Miami, Sharapova has her sights firmly set on finally making the Miami's winner's circle but will not face a re-match in the final against Williams, with both on the same side of the draw.

"Obviously I have been close, and I have had my fair share of chances of winning the tournament," said Sharapova. "Obviously I'm still looking for that.

"But with that said, I have had really great experiences, great matches with her, and it would be really special if I could win it, for sure.

"I expect to win because I have won before. I have won tournaments before."

It was smooth passage for all the top 10 seeds in action.

Serbia's Ana Ivanovic, seeded 12th, raced into the third round with a 6-1 6-1 demolition of American Lauren Davis while Italy's Flavia Pennetta, riding the momentum from her BNP Parisbas Open win at Indian Wells on Sunday (Monday, PHL time), moved on with a 6-3 6-3 win over Belarusian Olga Govortsova.