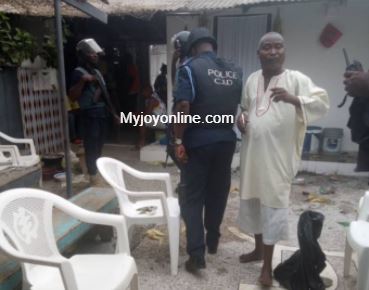 Three people have been injured while they were performing rituals ahead of the start of the Homowo festival in Teshie.

The victims include the Chief Priest (Wulomo) of the traditional area in the Ledzorkuku municipality after gunmen stormed the Osabu Ayiku shrine on Sunday.

According to the Secretary to the Chief Priest, the incident happened in the wee hours of the day when residents had visited the shrine to collect corn – which is the spiritual crop by the community – in order to partake in the annual rite as part of the Homowo festivities.

Speaking on Joy FM’s Midday News, John Adjetey Kommey explained that at about 7:30 am when the Wulomo was nearing the conclusion of the rite, “all of a sudden we heard gunshots, the throwing of stones and bottles.”

“They invaded the place because the police had left. Then they attacked the Wulomo and all those who came to witness the rituals,” Mr Kommey told said.

The Wulomo and the two others who were injured in the process are said to be awaiting police forms to report to the hospital.

Meanwhile, it is not yet clear who orchestrated the attacks.

Homowo is a harvest festival celebrated by the Ga people.

The festival starts in the month of August with the planting of crops before the rainy season starts.