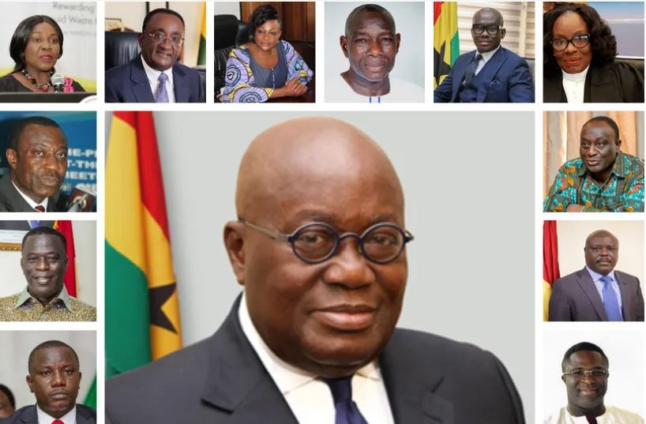 Between March 2017 and March 2019, politicians dressed in flowing robes and in kente of kaleidoscope of colours descended on the Jubilee House.

Their mission was to swear oaths of office, which among others, enjoined them to protect and defend the constitution. That constitution required them to declare their assets before taking office.

President Akufo-Addo on July 18, 2017, directed that all his appointees had declared their assets.

Five years on, The Fourth Estate tracked if indeed they lived up to that oath.

In a Right to Information (RTI) request to the Audit service, The Fourth Estate found that only 18 out of the more than 120 ministers complied fully with the constitutional provision in Article 268 (1) of the 1992 Constitution.

Dominic Nitiwul was appointed Minister of Defence in 2017. He declared his assets for the first term on March 20, 2017, and October 6, 2020. After his reappointment in 2021, he fulfilled this constitutional obligation on August 16, 2021.

He declared his assets on January 23, 2017, when he was appointed for the first term.

On April 1, 2021, Dr. Owusu Afriyie Akoto declared his assets for the second term as required by the law after he got the nod from parliament to serve as Agriculture Minister.

Cecilia Abena Dapaah: She is the Minister of Sanitation and Water Resources. Ms Dapaah declared her assets on March 15, 2017 when she was first appointed to serve and did her exit declaration on March 2, 2021. On her reappointment in 2021, she fulfilled the requirements of the law on March 12, 2021.

Alima Mahama: She was appointed to serve as the Minister of Local Government & Rural Development. The one-time Minister declared her assets on March 14, 2017, and March 30, 2021, respectively.

Gloria Afua Akufo: She declared her assets at the beginning of her term as Attorney-General & Minister of Justice on February 21, 2017, and at the end of her tenure on January 5, 2021.

Otiko Afisa Djaba: She declared her assets on September 14, 2017, and declared again when she resigned as Gender, Children & Social Protection Minister. That declaration was done on May 23, 2018.

Eric Kwakye Darfour: On his appointment as the Eastern Regional minister in 2017, he declared his assets on February 2, 2017, and February 24, 2021, when he exited office.

Joseph Cudjoe: He declared his assets when he was appointed to serve in government in 2017, on June 15, 2017. He declared again when the president’s first term ended on March 30, 2021. On the same day, March 30, 2021, he made his entry declaration for his reappointment.

Elizabeth Agyemang: As the Deputy Ashanti Regional Minister, she declared her assets on March 9, 2017 and on March 9, 2020 when she was exiting office.

What does the Asset Declaration law say?

By law, ministers are to declare their assets within six months in office and latest six months after the end of a government’s first term.

Article 268 (1) of the 1992 Constitution states that “a person who holds a public office mentioned in clause (5) of this Article shall submit to the Auditor-General a written declaration of all property or assets owned by, or liabilities owed by, him whether directly or indirectly (a) within three months after the coming into force of this Constitution or before taking office, as the case may be, (b) at the end of every four years; and (b) at the end of his term of office.”

The Constitution requires the declaration to be done before the public officer takes office. However, Section 1(4)(c) of the Public Office Holders (Declaration of Assets and Disqualification) Act directs public office holders to meet this requirement not later than six months after taking office, at the end of every four years and not later than six months at the end of his or her term.

The law requires that the President, Vice-President, the Speaker, Deputy Speakers of Parliament, ministers and deputy ministers of state, ambassadors, the Chief Justice and managers of public institutions in which the state has interest submit to the Auditor-General written declarations of all property or assets owned by, or liabilities owed by them, whether directly or indirectly.

DISCLAIMER: The Views, Comments, Opinions, Contributions and Statements made by Readers and Contributors on this platform do not necessarily represent the views or policy of Multimedia Group Limited.
Tags:
Akufo-Addo
Ministerial appointments
Ministers