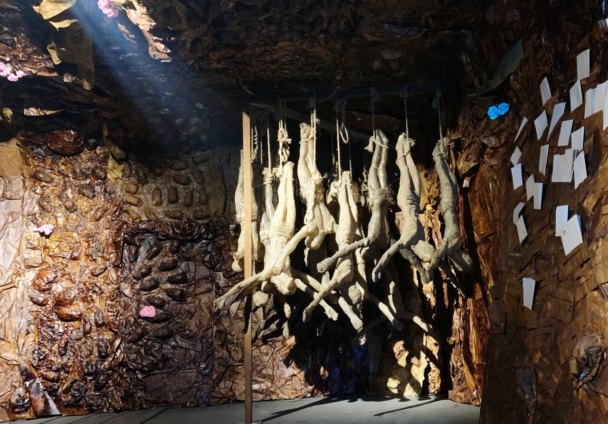 I was not prepared for the set I was greeted with. With my obtuse knowledge of the art embedded in religion, I had imagined that interpreting Christianity with my carnal mind, and quoting bible verses would be my only impediment. But boy! was I wrong.

On June 24, the Compound House Gallery was opened in Accra.

The novel space for art exhibitions was created using shipping containers converted into a space for visual artists.

It is on a mission to project very unique exhibition to the rest of the world.

“We’re looking at dealing with artistes who are very experimental with material, artistes who are trying to push the boundary of artistic practice and also interventions within the country or the space where they find themselves, and artists who are also looking beyond just a simple concept but rather a holistic concept and approach toward artmaking,” the founder, Nuna Adisenu-Doe told me.

This explained why ‘Chris-sis: The Feast of the Sacred Heart’ became the first of showcases lined up by the spaces in the coming weeks.

Curated by Tracy Naa Koshie, this inaugural project as unconventional as the architecture of the space itself was even more provocative.

“They were made with papers from old RME textbooks,” Nuna mentioned as we paused in the hallway to admire the strange pieces of flowery frames.

From repurposed RME textbooks to refocused religious symbolism, my mind was challenged.

I was with my friend and filmmaker, Nene Azu Jnr. We were in class together back in primary school, through those Religious and Moral Education (RME) tutorials.

And so you can imagine our collective surprise when Nuna gave out that piece of information.

As if he knew were already struggling to digest what we had seen in the catacombs prior.

So we went closer, and there they were. Snippets of lessons were seen on the paper-molded faces which had been strung together to create art along a long hallway towards a tabernacle.

I mean it when I say, Samuel Baah is an ‘attention-to-detail’ freak, and the rituals depicted on the walls demonstrate why this is true.

The exhibition is basically a show of symbolisms within the early Catholic Church.

The Feast of the Sacred Heart is a feast day in the liturgical calendar of the Roman Rite of the Catholic Church and certain Anglo-Catholic communities that is dedicated to the Sacred Heart.

In this regard, the artiste is exploring “simple symbolisms within this concept, and also looking at ways he could submit it and use it as a way to transfer his information.”

Samuel Baah Kortey was inspired by systems of symbols which bring together human, non-human and inhuman entities.

The catacomb was what triggered the most confrontational mix of imagery for me.

It was a dark room with crepuscular rays resembling light that shun through the clouds whenever the Bible sought to portray glory.

It beamed over about a dozen resin-cast statues of Jesus’ crucifix hanging upside down without the actual crosses.

Nuna says this was the draining of the blood that the Son of Man in order to share among Christians who need it to wash away their sins.

But there’s more to the technique. Slaughterhouse have a way of going about dressing their meat after the animal is slaughtered and the connection to this art piece is heavier than my lips can handle.

Nuna explains as we sat at the heart of the exhibition situated at Untamed Empire off the Spintex Road.

“The artist has a background, you know, working from the abattoir. He’s been collecting blood and other objects from the abattoir very, very long period of time, is interested in the fact that animals go through a certain production line that essentially ends their life. And you know, he puts it side by side with the death of Jesus Christ.

“If we may see how Jesus Christ came to see us in essentially give us life and how he had to go through a certain hierarchy to go to a certain humiliating death. And that’s essentially what the artiste is also trying to mimic here. But from here he’s trying to adopt, you know, the installation technique within the abattoir, where animals are hung upside down to allow the blood to flow in from there easily.”

Samuel seems to also play on the ancient conception that around the upside-down crucifix or the Cross of St Peter.

Peter, one of Jesus’ disciples was subjected to this method which is said to have happened during the reign of the emperor Nero in 64 CE in Rome.

“That’s supposed to be something demonic is also played on that idea to bring these sorts of challenging conventions in the exhibition,” he further added.

According to him, the artist is interested in life and death in particularly the Catholic Church or the Christian religion.

The exhibition according to the team, celebrates Christ’s love for humanity through sacrifice, death and the miracle of resurrection. It is a love feast symbolised by an arrow piercing through a heart, a crown of thorns as absent flowers encircling the heart, and fire spewing from it with a cross at its top.”

This is according to a summary which greets everyone at the entrance of the shipping container transporting knowledge via unorthodox art.

“It is the ritual of the Holy Communion eating of flesh (bread) and blood (wine) of Christ to sustain the community of Christian believers. Insidiously, this echoes vampirism and subtle glorification of violence. Yet this violence is not only symbolic,” the summary adds.

DISCLAIMER: The Views, Comments, Opinions, Contributions and Statements made by Readers and Contributors on this platform do not necessarily represent the views or policy of Multimedia Group Limited.
Tags:
Chris-sis: The Feast of the Sacred Heart
Compound House Gallery
exhibition
Kenneth Awotwe Darko
Samuel Baah Kortey